Hurricane Maria is currently located about 55 miles north of Grand Turk Island and she is moving northwest at 8 mph. Although she didn’t hit the Dominican Republic head on, she has brought some really nasty weather to the area, including the city of Punta Cana, a very popular tourist destination.

As of Friday afternoon, the worst of Maria had pulled away from Hispaniola, but the island was still experiencing some rain and wind from the storm, which has weakened to a Category 3 hurricane.

“Maria continues to pound the Dominican Republic with heavy rain and strong winds. Wind gusts over 60 mph have been clocked along the northeast Dominican Republic coast, including in the resort city of Punta Cana,” reports The Weather Channel.

Restoration efforts have already begun in some areas of the Dominican Republic where the rain and wind has subsided. The majority of the damage was seen in downed power lines and trees. Thankfully, most of the area was spared of the worst of this storm. Not only did she weaken, but Maria moved more north than originally predicted, which was good news for the island overall.

“The main tourism installations and infrastructure in Punta Cana, Samana and Puerto Plata including the North Coast, have not suffered any important damage with Hurricane Maria. Its main effect has been damages to gardens and the falling of trees,” said Asonahores, the hotel and tourism association of the Dominican Republic, in a statement, according to the International Business Times.

Areas like Puerto Rico and the U.S. Virgin Islands weren’t nearly as lucky. These areas took a direct hit from Maria when she was a Category 5. The devastation that she caused will take several months to clean up. The entire island of Puerto Rico is currently without electricity.

Below are some photos from the damage caused by Hurricane Maria in Punta Cana.

Some good news, some restaurants should be up and running from lunchtime. Others not so lucky. #HurricaneMaria #PuntaCana pic.twitter.com/YGi7j8XXlh 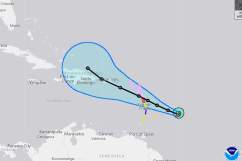