After the damage caused by Hurricane Irma last week, the last thing residents in Jacksonville needs to hear is that there’s another hurricane in the Caribbean. On Sunday, Tropical Storm Maria strengthened to become Hurricane Maria and it’s less than 200 miles from Barbados. Barbados is over 1,800 miles away from the First Coast, meaning that it’s too early to tell if Maria will even reach Florida as a major hurricane. Here’s what we know about Maria so far.

NHC/NOAAHurricane Maria forecast at 8 a.m. from the National Hurricane Center.

A recent ABC News forecast predicts that Maria will be a Category 3 hurricane by the time it reaches Puerto Rico between Wednesday and Thursday. On Sunday, Maria became a Category 1 Hurricane, with maximum sustained winds of 75 mph, the National Hurricane Center in Miami reported. By Monday morning, its maximum sustained winds reached 110 mph and it is moving at 12 mph. The latest forecast from the NHC looks better for Florida, as it shows Maria’s cone taking a turn north before reaching Cuba.

SFWMDSpaghetti model for Maria for September 17.

As the Sun Sentinel notes, forecasters are cautioning that it is far too early to tell where Maria will end up. Some “spaghetti models” show Maria turning north before it reaches the Bahamas. But again, it’s very early and many of these models show that the Leeward Islands, many of which were devastated by Irma, could face a Category 3 hurricane.

Tropical Storm Maria is forecast to become a hurricane later today. Impacts are likely for the U.S. Virgin Islands and Puerto Rico. pic.twitter.com/uXpSsjAufB

ActionNewsJax’s Michael Buresh writes that Maria’s possible interaction with Hurricane Jose has “added to the confusion,” since Jose could impact Maria’s trajectory. As for Jose, Buresh predicts that storm will make no major impact on Florida. He also does not think Jose and Maria will interact.

Here’s the seven-day forecast for Jacksonville from the National Weather Service: 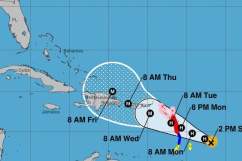 Loading more stories
wpDiscuz
1
0
Would love your thoughts, please comment.x
()
x
| Reply
Hurricane Maria is still too far out into the Caribbean to tell if it will make an impact on Jacksonville, Florida. Here's the latest forecast on Maria.