The island of Vieques in Puerto Rico is squarely in the path of Hurricane Maria. The Category 4 storm, with maximum sustained winds of 155 miles an hour, is just 15 miles south-southwest of San Juan, according to the latest advisory from the National Hurricane Center.

The eye of Maria will make landfall in Puerto Rico in a couple of hours, cross Puerto Rico today, and pass just north of the northeast coast of the Dominican Republic tonight and Thursday.

Hurricane Maria passed by St. Croix in the U.S. Virgin Islands on Tuesday night as it was downgraded from a Category 5 storm.

Vieques and the east coast of PR starting to feel the winds of #HurricaneMaria and rain. pic.twitter.com/wx92JzgwFb

Storm surge could be as high as 6 to 9 feet. Rainfall is expected to reach 12 to 15 inches, with 25 inches in some areas.

President Donald Trump took to Twitter on Tuesday night to say, “Be careful, our hearts are with you.”

Puerto Rico being hit hard by new monster Hurricane. Be careful, our hearts are with you- will be there to help!

Vieques is just 8 miles east of mainland Puerto Rico. The island’s population is about 9,000 people. 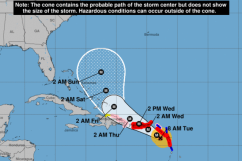 Loading more stories
wpDiscuz
0
0
Would love your thoughts, please comment.x
()
x
| Reply
The island of Vieques in Puerto Rico is squarely in the path of Hurricane Maria, now a Category 4 storm.