Hurricane Irma is still days away from striking Florida, but the Category 5 hurricane is already crippling air travel in the Caribbean and Florida. The hurricane is striking two weeks after Hurricane Harvey left its own impact on air travel.

Airlines with flights to the northern Leeward Islands and other Caribbean destinations have begun offering free refunds or changes to itineraries. Monroe County announced that Key West International Airport has been closed indefinitely, as of Wednesday. When Antigua closed its airport on Tuesday, officials released an ominous statement: “May God protect us all.”

Here’s a look at the airlines that have offered waivers. It’s important to always contact your airline to check if your flight has been cancelled or delayed before heading to the airport.

Delta:
Delta announced that tickets for flights to or from 17 airports between September 5 and 12 can re-book their flight without facing a change fee.

Flights to Punta Cana, DO (PUJ); San Juan, PR (SJU); Santiago, DO (STI); St. Croix, VI (STX); St. Maarten, SX (SXM); St. Thomas, VI (STT); and Turk Caicos ISLS, TC (PLS) on September 5-9 have to be rescheduled for flights that begin no later than September 12. However, if you book a flight after September 12, you will have to pay the difference if there is one.

.@AmericanAir says it has cancelled 2,000+ flights because of Irma, will halt flights from Orlando Saturday pic.twitter.com/jeuQIMSAhp

American Airlines’ waiver for change fees covers flights from 32 airports, including six in Florida. If you bought a ticket for a flight to or from Key West, Florida (EYW); Fort Lauderdale, Florida (FLL); Miami, Florida (MIA); Palm Beach, Florida (PBI); Fort Myers, Florida (RSW); and Sarasota, Florida (SRQ) by September 5, you can change your flight for up through September 15. You can also change your origin or destination city to an airport within 300 miles. For a full list of the international airports covered, click here to go to AA.com.

American Airlines told USA Today that its last flight from MIA will by the 3:49 flight to Dallas/Fort Worth. Orlando flights will stop at 2 p.m. Saturday. American will also start suspending operations at Fort Lauderdale, Fort Myers and West Palm Beach on Friday afternoon.

United Airlines
United Airlines is offering waivers for flights to and from four Florida airports: Ft. Lauderdale, FL (FLL); Ft. Myers, FL (RSW); Miami, FL (MIA); and West Palm Beach, FL (PBI). If your flight is for SEptember 5-12, you can book a flight that departs on or before September 15.

JetBlue
If you have booked a flight from September 9 to 10 to Fort Lauderale, FL (FLL); West Palm Beach, FL (PBI); Fort Myers, FL (RSW); Sarasota, FL (SRQ); Tampa, FL (TPA); and Orlando, FL (MCO) through JetBlue, you can reschedule your flight through September 12.

Southwest
If you have a Southwest flight to Fort Lauderdale (FLL); Fort Myers (RSW); Havana (HAV); Nassau (NAS); Orlando (MCO); Punta Cana (PUJ); San Juan (SJU); Tampa (TPA); and West Palm Beach (PBI) between September 5 and September 11, you can re-book to a new flight within 14 days of the original travel date.

Air Canada
Air Canada is offering waivers for flights to or from any airport in Florida booked between September 4 and 11. You have until October 1 to re-book without charge. 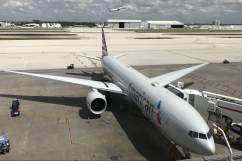