Getty The Miami skyline in July.

School districts throughout South Florida have already cancelled classes to prepare for Hurricane Irma. The latest model from the National Hurricane Center has the storm reaching South Florida by Sunday morning. You can find the complete list of counties that have cancelled school so far below.

NOAAThe NHC’s projection for Hurricane Irma as of Tuesday at 5 p.m. AST.

On Monday, Florida Governor Rick Scott declared a State of Emergency so local governments could prepare for the storm a week in advance. The declaration covers all 67 Florida counties, including Miami-Dade, Broward, St. Lucie, Lee, Palm Beach and Sarasota.

The NHC’s 5:00 p.m. public advisory reports that Irma is still a Category 5 storm and its maximum sustained winds have reached 185 mph. It is moving at 15 mph and still moving closer to the northern Leeward Islands. The NH describes Irma as “potentially catastrophic.”

Irma is expected to be particularly damaging to the Florida Keys, with residents there already starting evacuations. Monroe County also cancelled Wednesday classes and schools will remain closed until further notice.

Here are the school districts that have already cancelled classes. This list will continue to be updated. Many of the districts noted that they will make decisions about Monday, September 11 later in the week or the weekend, depending on Irma’s impact.

Monroe County, which covers the Florida Keys, has cancelled all classes beginning Wednesday, September 6. Schools there will remain closed until further notice.

The University of Miami cancelled classes at the Coral Gables and Marine campuses for Wednesday through Friday. Saint Thomas University cancelled all classes and events for Thursday, Friday and the weekend. Florida International University hasn’t made an announcement yet, but has posted a hurricane guide for students. 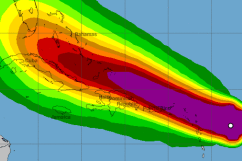