Here is the latest forecast track on #Irma pic.twitter.com/0KprZfsswX

Another massive storm is headed for the United States, and this time, it appears much of southern Florida is directly in its path.

Hurricane Irma is currently in the Caribbean and slowly moving toward the U.S. It strengthened to a Category 5 storm Tuesday, meaning winds are in excess of 175 mph, and it’s moving at about 14 mph to the west.

The NHC said Tuesday that wind gusts of over 185 mph make Irma “the strongest hurricane in the Atlantic basin outside of the Caribbean Sea and Gulf of Mexico in NHC records.”

Meteorologists have been monitoring the storm and projecting its potential path. As of now, it appears if Irma were to make landfall in Florida, it would be sometime around Sunday morning and Miami could be directly in its eye. However, it’s extremely difficult to forecast the path of a hurricane more than four days out, so the exact path it will take isn’t yet known.

“This general motion is expected to continue (Tuesday), followed by a turn toward the west-northwest tonight,” a NHC advisory said. “On the forecast track, the extremely dangerous core of Irma is forecast to move over portions of the northern Leeward Islands tonight and early Wednesday.”

So, with many projections saying the Miami area would be directly in the path of Irma, what does the forecast/path look like for Hialeah?

According to The Weather Channel, the weather forecast is calling for rain showers beginning Saturday evening and lasting until Monday afternoon. As of now, the forecast calls for the wind to begin picking up Friday and into Saturday with 84 mph winds projected for Sunday.

Florida Governor Rick Scott declared a state of emergency ahead of the storm Monday so that “local governments have ample time, resources and flexibility to get prepared for this dangerous storm.”

In response to the declaration, the Miami Superintendent announced that schools will be closed Thursday and Friday, and residents have continuously been encouraged to remain vigilant and keep an eye on the latest forecast.

#BREAKING: @MiamiSup has just announced that all schools in @MDCPS will be CLOSED Thursday and Friday in preparation for #HurricaneIrma. https://t.co/Uy4zlCOJ1d

Hialeah is taking many precautions ahead of the storm. The official city Twitter account tweeted a list of gas stations with generators in the area and also evacuation centers, if need be.

EVAC CENTERS LIST. All residents who need special assistance should call 311 for the locations of specialized centers. #HurricaneIrma pic.twitter.com/g7zTTrGAic

Lines have formed at storms around the area as people try to get last-minute supplies for the storm. 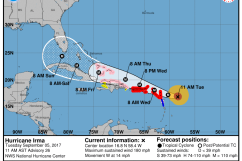 Loading more stories
wpDiscuz
1
0
Would love your thoughts, please comment.x
()
x
| Reply
Hurricane Irma has strengthened to a Category 5 storm and it appears southern Florida is in its path. Get the latest update and map of Irma's path.