The latest GFS models show Hurricane Irma heading to the east of Florida, rushing up the Eastern Seaboard, perhaps making landfall somewhere in the Carolinas.

What Is the GFS?

“The Global Forecast System (GFS) is a weather forecast model produced by the National Centers for Environmental Prediction (NCEP). Dozens of atmospheric and land-soil variables are available through this dataset, from temperatures, winds, and precipitation to soil moisture and atmospheric ozone concentration. The entire globe is covered by the GFS at a base horizontal resolution of 18 miles (28 kilometers) between grid points, which is used by the operational forecasters who predict weather out to 16 days in the future. Horizontal resolution drops to 44 miles (70 kilometers) between grid point for forecasts between one week and two weeks.”

How Accurate Is the GFS & What Do the Updates Mean?

Many meteorologists and weather specialists consider the GFS models to be one of the two most dependable. The other model is the European model, often referred to as the ECMWF.

When hearing about GFS updates, you might see things like “12z” or “18z.” These refer to the times in which the tests to determine the track were run.

Below you will see the 12z and the 18z runs of the GFS. It has since been determined that this is an “outlier,” which means it’s the one path that completely strays from the rest of the possible tracks. While it’s still a possible track, it is considered less probable.

Big shift east between the 12z and 18z runs of the GFS. Seems like an outlier but we'll see if this becomes a trend. #Irma pic.twitter.com/kQ5agH0GBd

The ideal situation is when the GFS model and the Euro model match — it takes the “guess work” out of predicting hurricane paths. However, the Euro model currently has Irma heading toward the Florida Keys and Miami, affecting all inland cities from Naples to Tampa.

The path of Irma will be better gauged in the next 24 to 48 hours. 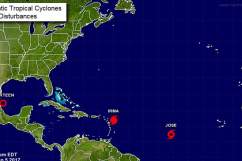 Loading more stories
wpDiscuz
1
0
Would love your thoughts, please comment.x
()
x
| Reply
The latest GFS model shows Hurricane Irma heading to the east of Florida and making its way up the Eastern Seaboard.