NOAA A map from the NOAA shows the forecasted path Hurricane Irma is expected to take.

Just over one week after the Houston, Texas area dealt with the catastrophic damage brought by Hurricane Harvey, many parts of the Florida Peninsula are bracing for Hurricane Irma.

Irma, which is currently in the Caribbean, has strengthened to a Category 5 storm, meaning it has sustained winds of 175 mph. While forecasts of its path are still uncertain, many meteorologists say it will make landfall in the Miami area around some time around Saturday.

According to the National Hurricane Center, Irma has grown to an “extremely dangerous 180-mph storm” and is moving westward at 14 mph. It’s been located 225 miles east of Antigua and will continue on that path until the atmosphere forces a northern turn.

So, where exactly will the storm end up if and when it makes landfall in the United Sates? Is New Orleans or any part of Louisiana at risk?

Well, the official NOAA track of the storm, often referred to as the “cone of uncertainty,” includes much of southern Florida from Key West to Miami to Port Charlotte. While those are the early forecasts, the NOAA notes that with the unpredictability of storms, it’s virtually impossible to forecast the exact path of Irma more than four days in advance.

Some residents in New Orleans are concerned about the impact Irma will have on the city, especially after Hurricane Katrina tore the city apart in 2005, leading to nearly 2,000 deaths.

However, meteorologists for the National Hurricane Center say those in New Orleans shouldn’t be too concerned about Irma having an impact on the city, but must remain vigilant.

The National Weather Service in New Orleans issued an advisory on Irma at 10 a.m. on September 5, saying: “Irma is moving west but a turn to the west-northwest is expected soon and should remain on that track through 5 days. After that, a turn to the north is possible, but where/when is not certain. Pay close attention to this storm.”

Here is the 7am update from @NHC_Atlantic. Irma is now a category 5 hurricane. pic.twitter.com/QbsyPIKvsH

Past trends indicate that the storm will eventually turn north and further east, meaning when it makes landfall in Cuba, it should sharply turn away from New Orleans. As of now, forecasters say the storm will strike Cuba on Saturday afternoon before heading for the Florida area.

However, Louisiana State Climatologist Barry Keim told NOLA.com that of all the Irma models, one does show it touching the mouth of the Mississippi River and hitting the Mississippi Gulf Coast.

“We’re talking five to seven days before it has a chance of getting to the Gulf,” he told the news outlet. “But it is a storm that bears watching.”

One of the things that changes the path of hurricanes are pressure systems, and a “shortwave trough” of low pressure, as Kein referred to it as, is expected to move the storm to the southeastern U.S.

Low overnight temperatures are projected for the New Orleans and Baton Rouge areas by Friday and Saturday, meaning those areas would benefit from the “shortwave trough.”

With a storm of this magnitude, it’s important to stay alert and be prepared. And as Irma’s continued to grow, Florida Governor Rick Scott has tried to do just that. On Monday, he declared a state of emergency so that “local governments have ample time, resources and flexibility to get prepared for this dangerous storm.”

Officials in New Orleans are also being proactive about Irma, although it remains thousands of miles away.

Mayor Mitch Landrieu’s press secretary Erin Burns told NOLA.com they are keeping tack of Irma and are wary of the impact heavy rains that accompany the hurricane could have on the city, especially because of issues with the Sewerage and Water Board’s drainage system. Burns told residents in New Orleans to keep track of Irma and listen to advice from officials. 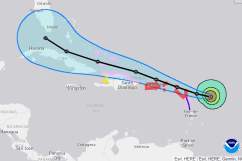 Loading more stories
wpDiscuz
0
0
Would love your thoughts, please comment.x
()
x
| Reply
Hurricane Irma has reached Category 5 storm levels and appears to be headed toward the United States. See a map of its path and if New Orleans will be affected.