Hurricane Irma will reach the Leeward Islands tonight, moving at about 12 to 14 mph. Currently a Category 5 hurricane, Irma will move slowly over several Caribbean islands including Puerto Rico, St. Maarten, and the Dominican Republic.

Millions of Americans have been keeping their eyes on weather maps and on the storm’s latest track, wondering which direction Irma will take. It is too soon to know for sure whether Irma will head into the Gulf, up Florida’s west coast, or take a turn and head up Florida’s east coast, potentially making landfall in the Carolinas.

“There is nothing I see that takes the storm away from North Carolina. Hopefully it will be in a much more weakened state,” said WRAL meteorologist Mike Maze. “If [Irma] takes a turn to the north sooner than forecast, we could have a pretty big impact. Then, if it goes over inland Florida, we could still get a lot of wind and rain,” he added.

Within the last hour, the newest GFS model was updated and it is showing a more eastern turn for Irma. That means that this particular model shows the hurricane moving to the east of Florida, impacting cities and towns on the Sunshine State’s coast (places like Fort Lauderdale, Daytona Beach, and West Palm Beach) before moving up the Eastern Seaboard.

As you can see from the photo below, Irma could head straight for the Carolinas and the Outer Banks if this latest model is correct.

Here's the latest GFS model, taking #HurricaneIrma up the east coast of Florida. But it's still early. pic.twitter.com/Jf6AP9ycS5

Below are the possible tracks that Irma could take, once she passes over Cuba and the Bahamas. As you can see, there are very few scenarios in which North Carolina doesn’t see any severe weather from this storm.

If Irma is going to head toward North Carolina, it will be after the weekend. Her exact path will not be known for at least another 24 to 48 hours. If you are in an area where Irma might be headed, it’s important to stay vigilant and aware, to be prepared and not to panic. 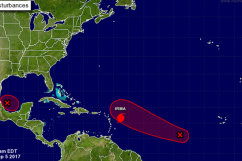