Hurricane Irma is making her way toward the Dominican Republic and the Bahamas, moving at about 14 mph. The storm is still a Category 5, bringing catastrophic conditions by way of heavy downpours and extremely high winds to several Caribbean islands.

12z GFS not a good look for SE Florida…certainly more corrections coming, but models seem to be zeroing in. pic.twitter.com/YsR052jpSk

Tampa, Florida, residents have been preparing for a potential direct hit based on very early models showing Irma’s potential track. However, the most recent NOAA map (above) shows the “cone of uncertainty” much further east, suggesting that Tampa will be spared from the worst of Irma.

The city is still expected to experience heavy rain and high winds over the weekend and into the beginning of next week due to the storm’s enormity.

“Irma could miss Tampa by 100 miles and there could still be significant impact in Tampa because the storm is very large,” explained associate researcher at the University of Wisconsin-Madison Derrick Herndon.

The wind in Tampa will pick up on Saturday evening. Check out the map below to see the projected wind arrival times.

Tampa will see sustained winds ranging from 40 to 60 mph. The map below shows the tropical storm force wind speed probability.

The current weather forecast in Tampa shows “showers” for Sunday with a 70 percent chance of rain. On Monday, scattered showers are expected in the area. Most areas in Tampa and the surrounding counties will see anywhere from 2″ to 5″ of rain from Saturday through Monday night. Those rainfall totals may change if the track of the storm shifts further west or east. Localized flooding could still be an issue for residents living in a flood zone. To check to see if you are one of those people, you can plug in your address on the Hillsborough County website.

By Tuesday, Irma is expected to be on her way up the east coast, giving way to sunny skies in Tampa. 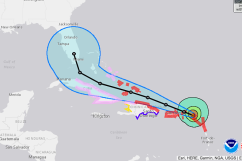 Hurricane Irma’s ‘Cone of Uncertainty’ Shifts: What Does it Mean?

Loading more stories
wpDiscuz
0
0
Would love your thoughts, please comment.x
()
x
| Reply
Hurricane Irma will likely miss Tampa, but the city will still experience heavy rains and winds this weekend and into early next week.