Now that hurricane conditions are possible for Sunday in Orlando, Florida, is Orlando evacuating? Is the rest of Orange County?

There is now a hurricane warning for Orange County and hurricane conditions are listed as possible in the Saturday forecast for Sunday, Sunday night and Monday.

“In the interest of public safety, Orange County Mayor Teresa Jacobs issued a mandatory evacuation notice to all residents living in mobile homes in Orange County,” the country’s release said. “These structures are particularly high risk for storm-related damage and the order has been issued in an effort to preserve the safety of those residents. Upon notice to evacuate, residents are expected to make final preparations and plans to seek shelter prior to the onset of Hurricane Irma which is anticipated to affect Central Florida beginning Sunday morning.”

The latest map of Hurricane Irma as of 11 a.m. on September 9.

The county added: “At this time, Orange County Fire Rescue personnel are going door-to-door in various communities to deliver the evacuation notice.”

Orange County was planning to open shelters at 9 a.m. Saturday, officials said at a press conference on September 7, for those who feel it’s necessary. This is the list of shelters in Orange County:

“No evacuations have been ordered in Orange County,” the county had previously announced on September 8 in a press release that rounded up information on the storm.

Emergency management officials in Orlando and Orange County also previously held a press conference and said that they don’t recommend that people evacuate their homes as long as they are not in mobile or manufactured homes. The September 8 order has formalized that advice and made it mandatory.

#Irma is expected to move through the SE Bahamas today and approach south Florida on Saturday as a dangerous category 4 hurricane pic.twitter.com/83bh2woM43

Ronald Plummer, manager of the Orange County office of emergency management, said previously before the order for people in mobile homes: “We are an inland county. We don’t recommend you to evacuate your home, if you are in a site-built home. We’re going to be in touch with individuals in manufactured or mobile home parks, and those in low-lying areas.” He said that authorities have a shelter plan in place and will give that information to the latter individuals.

You can see a list of evacuation orders for central Florida counties here. Again, note, as of the afternoon of September 7, according to WESH.com: “No voluntary or mandatory evacuation notice has been posted by Orange County at this time.”

The mayor and Ron Plummer also provided an update on September 7:

Plummer said that “what we can expect in Orange County…we’re looking at around about Saturday afternoon, early Sunday we will probably start to feel some winds.” He said on Saturday the county has organized individuals to staff shelters and is “looking to open shelters for the public” at 9 a.m. on Saturday morning.

Watch the earlier press conference here (it was held before the mobile home evacuation order):

Recent forecast models showed that Hurricane Irma is now projected to be shifting eastward and north. Orlando is now in the forecast cone. That doesn’t mean Orlando and Orange County will be hit by the hurricane; it means it’s more possible than it was before.

However, some of the September 8 spaghetti models are now showing the storm taking a slight westward turn.

NEW spaghetti plot modeling… looking for trends in clustering & there is a continued shift of track into SW FL #Irma #flwx pic.twitter.com/ZYaj53mr3g

The National Weather Service is now forecasting the possibility of Hurricane conditions for Sunday and Sunday night in Orlando.

Orange County Mayor Teresa Jacobs urged citizens to avoid alarm but prepare. “We continue to closely monitor the path of Hurricane Irma. Our emergency management operations center remains in a monitoring level,” she said on September 6. “We’re hoping and praying that it continues to veer to the east.”

Jacobs said the city was preparing in case the hurricane strikes Orlando and added that Orlando was a place that a lot of people come to shelter. She noted that Orange County has started offering its residents sandbags. An ID is required. See this map for where you can get sandbags.

The mayor said the city already has pump stations set up in low lying areas. She said the city is preparing for what could be a “significant water storm at a minimum.” See the Orange County storm preparation handout here.

The core of #Irma is expected to move near or over the Turks and Caicos and the SE Bahamas later today and tonight https://t.co/tW4KeGdBFb pic.twitter.com/pTlmFlmnG9

The mayor said that the earliest Orange County and Orlando would be opening shelters would likely be Saturday “but we are going to remain incredibly fluid. We do want our citizens to be prepared if they need to shelter.”

People needing non-emergency information should call 311, the mayor said. She said that she doesn’t think Orlando will get the type of massive rainfall that Houston experienced but the strength of the storm means it needs to be taken very seriously.

Here are the latest Key Messages on #Irma https://t.co/tW4KeGdBFb pic.twitter.com/1hlIQPw7yP

The mayor also said that authorities were making a concerted effort to reach out to homeless people in advance of the storm.

Ray Hanson, director of Orange County Utilities, said there has been a shortage of water in some grocery stores but that authorities believe it’s a temporary supply issue and that many grocery stores are restocking water.

“People should have water put away in the unlikely chance we have interruption in our water supply,” he said.

Authorities also recommend that people prepare by filling up a bathtub with water that they can use if necessary for things like flushing toilets.

The mayor said there’s potential for wind and “some flooding.”

A recent spaghetti model does show the hurricane continues to move slightly to the west and is now imperiling Georgia and Tennessee as well as Florida.

Plummer suggested that people prepare a plan to “identify what you’re going to do if a storm comes.” He suggested having a weather radio, water, necessary medicine and cash on hand, and to have extra batteries.

Authorities also said they will be setting up special needs shelters, especially for people dependent on anything requiring power. Those probably won’t open until Saturday morning, either, and the locations have not yet been announced. 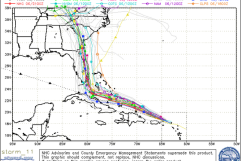 Loading more stories
wpDiscuz
0
0
Would love your thoughts, please comment.x
()
x
| Reply
Learn about any mandatory evacuation orders in Orlando, Florida and Orange County, and see a list of shelters.