Getty A man runs from smoke and debris following the September 11 attacks.

16 years after 9/11 was carried out by al-Qaeda and Osama bin Laden, the United States and the world is now at war with the Islamic State. Is there a credible terrorist threat for the 16th anniversary of September 11?

No specifics of a threat have been given like previous years, particularly by the Islamic State, but CNN reports that “US military bases and facility throughout the world are… on high alert.”

Last year, the White House’s top counterterrorism official, Counterterrorism Center chief Nick Rasmussen, said that the “terrorist threat facing the U.S. and its European allies is ‘bigger, wider and deeper’ than at any point since the Sept. 11 attacks 15 years ago,” according to the Washington Times.

In 2015, Twitter accounts affiliated with the Islamic State threatened a September 11 hacking attack against the United States. No cyber attacks were reported.

But without a doubt, ISIS and other terrorist organizations like it are planning to capitalize on American fears of a repeated attack on September 11.

On September 11, 2001, four coordinated terrorist attacks against the United States forever changed the course of history. Four passenger airliners were hijacked by 19 al-Qaeda terrorists with the intention of flying them into landmark buildings. American Airlines Flight 11 and United Airlines Flight 175 were flown into the North and South towers of the World Trade Center complex in New York City. American Airlines Flight 77 was crashed into the Pentagon in Arlington County, Virginia. United Airlines Flight 93 was headed toward Washington, D.C., but was crashed into a field near Shanksville, Pennsylvania after passengers overtook the hijackers. It is believed the intended target of Flight 93 was either the White House or the Capitol Building. The attacks claimed the lives of 2,996 people, including the 19 terrorists.

It is worth noting that ISIS and al-Qaeda are two, separate terrorist organizations currently waging “jihad” against each other.

The most recent confirmed ISIS terrorist attack took place in Barcelona when a van struck several pedestrians after jumping a sidewalk in the Las Ramblas neighborhood of the Spanish city. 13 people died in the highly-coordinated attack by multiple terrorists.

Just days later, a man killed 2 people in a stabbing spree in the western Finland city of Turku. While ISIS didn’t claim the attack, Finland police say it was “likely terrorism,” reports NBC. 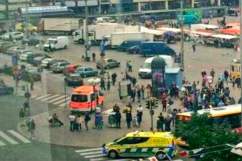 Loading more stories
wpDiscuz
1
0
Would love your thoughts, please comment.x
()
x
| Reply
16 years after 9/11 was carried out by al-Qaeda and Osama bin Laden, the United States and the world is now at war with the Islamic State. Is there a credible terrorist threat for the 16th anniversary of September 11?