Joey Spann, the minister at Burnette Chapel Church in Antioch, Tennessee, who is in critical but stable condition after a mass shooting attack by a masked gunman, was described as an easygoing man who devoted his life to religious education and youth coaching.

At least seven people were wounded – and one woman, Melanie Smith, was shot to death in the parking lot – in the carnage at the church in Antioch, the Nashville Fire Department confirmed on Twitter. The former pastor of the church said that Joey Spann and his wife, Peggy, were among the shooting victims, which has now been confirmed.

People who knew the Spanns posted prayers and tributes to them on social media. “Coach Spann was my Bible teacher many years ago at Ezell-Harding. I am heartbroken and in constant prayer,” wrote one woman.

Prayers go out to my high school coach, Joey Spann & everyone else involved. You are in the hearts & prayers of all your bball children. pic.twitter.com/sqJiHorlIH

There were rumors that the gunman, identified as Emanuel Kidega Samson, was wearing a clown mask, but police later said the mask was “more like what you would see on a skier.” The 25-year-old gunman, who was from Sudan originally and more recently from Rutherford County, Tennessee, and was a former member of the church, accidentally shot himself. He survived and is in custody. He was confronted by a church usher, Robert Engle, who had a permit to legally carry a firearm, police said, calling that man a hero.

As a teacher, coach, and minister, Joey Spann has been involved for years in religious work in Tennessee.

1. Another Parishioner Leapt On Top of Joey Spann to Stop The Bleeding & the Minister Was Described as Someone Who Would Help Anyone

One parishioner described the horrific moment when the gunman stormed into the church. Minerva Rosa told the Tennesseean that Spann shouted “run” to the congregation, but Joey Spann was shot. According to the newspaper, she “applied pressure to Spann’s chest while waiting for help to arrive.” She later visited him in the hospital and said he was “very conscious,” the newspaper reported.

Rose spoke to the media while wearing a bloodied green dress. You can watch the video above.

Former pastor Bill Hunter told the news media in an interview that he had heard that Joey Spann and his wife, Peggy, were among the victims, which has now been confirmed by authorities.

“I understand there are eight people who have been shot including the shooter,” Hunter said. He said that he had heard that “the man just walked in, sat down, and started shooting. That’s basically all I know. That’s what I’ve been told.”

Mike McPherson, a close friend of Spann’s who works with him at Nashville Christian School, told The Tennessean that Spann would have tried to help anyone, even the gunman.

“He would have taken care of him without even knowing him,” McPherson said to the newspaper. “Coach Spann is that way almost to a fault.”

Burnette Chapel Church of Christ posted a welcome message on its website that reads, “If you are looking for a church home, you will find us to be a friendly, Bible based group of folks who love the Lord and are interested in spreading His Word to those who are lost.”

The gunman, Emanuel Samson, is from Murfreesboro.

A native of Sudan who is a bodybuilder, Samson went to college in Flint, Michigan, and college in Tennessee. He is a legal resident, but it’s not clear whether he’s a U.S. citizen. On Facebook, he frequently posted about his Christian religious beliefs years ago, although it’s not clear what his current beliefs are. He has worked as a cook and a pizza restaurant driver. In February 2010, he wrote, “Ready to get Baptised:) [only ONCE,unlike sum ppl].” A day earlier, he wrote, “i dont need to change myself before i come to Christ,cause Christ came into me and CHANGED ME..” He was in high school when those posts were written. 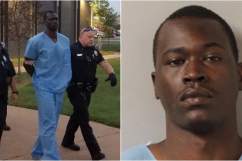 2. Joey Spann Has Worked for Years as a Minister & Youth Minister at Churches Throughout Tennessee

Joey Spann has worked for years in religious education and ministry.

Prayers for Coach Joey Spann, his wife Peggy, and all who have been impacted by this terrible tragedy. pic.twitter.com/qraPcMvlTQ

A vigil will be held at 7 p.m. at Nashville Christian for the shooting victims. Pastor Joey Spann teaches at school.https://t.co/OWQJfyk2F0 pic.twitter.com/lZ0slr5jq9

According to a church biography of him, “Joey Spann graduated from Hume-Fogg High School and David Lipscomb College. He started teaching at EzellHarding during the 1974-75 school year. In 2007, Joey went to Goodpasture and now teaches 8th grade Bible. He has served as minister or youth minister at Smith Springs, Vultee, Northeast, Shady Grove, Old Hickory, West Nashville Heights, Pasquo, and now at Burnette Chapel where he is also an elder. He and his wife, Peggy, were married in 1974 and have two children and two grandchildren.”

3. Spann Teaches at a Nashville Christian School & Is a Youth Basketball Coach

Spann is a basketball coach.

In the Nashville Christian School article, Spann also added, “I wanted to become a teacher here at Nashville Christian, because a lot of my friends around here that work in the staff here, and I wanted to work with them and me closer to them as well. I also wanted to be a teacher, because I wanted to get a second job to support me while I do my job at preaching. And lastly, students have taught me outside of the classroom that you don’t judge a book by its cover.”

4. Joey Spann Previously Survived a Heart Attack & Said He ‘Felt the Hand of God Touching Me’

Spann had spoken previously about a near-death experience that occurred when he had a heart attack.

When he almost died of a heart attack in 2001, he told the Nashville City Paper, “I am so fortunate. I’m a Christian, and I felt the hand of God touching me.”

A 2011 article on the heart attack began, “For Joey Spann, Feb. 25, 2011, was a night he and many others won’t ever forget. A month after his halftime collapse at the scorer’s table at David Lipscomb High School’s gymnasium and subsequent quadruple bypass surgery, the Goodpasture Christian girls coach appears to be on his way to complete recovery.”

Nashville Christian School wrote of the Spanns on Facebook, “As you may already know, one of our Bible teachers, Joey Spann, and his wife were both injured in the church shooting this morning at Burnette Chapel Church of Christ in Antioch. We do not have any additional information at this time but want to boldly ask you to pray. Please lift up Coach Joey Spann and his wife Peggy and all who have been injured or impacted by this tragic event. We will keep you informed as we have more information. Thank you for being a part of our family of faith and for interceding on behalf of the Spanns.”

Police have confirmed that eight people were wounded – including the shooter – and a woman, who was shot in the parking lot, has died. She has now been named as Melanie Smith Crow, 39, of Smyrna, Tennessee, a single mother of two.

The fire department called the shooting a “mass casualty situation” early on, but only one fatality was later reported. Reporter Natalie Allison said on Twitter that Smith had died in the parking lot, and others were shot and one person, the hero who intervened, was pistol-whipped. According to The Tennessean, the man who was pistol-whipped, Robert Engle, had confronted the shooter.

The heroic usher, bleeding from the pistol whipping, “exited the sanctuary, got a gun from his vehicle and confronted the shooter, who then shot himself,” the newspaper reported.

Terribly sad news coming out of #Antioch/Nashville, TN. Mass shooting at a Church . Thank you, Robert Caleb Engle, for stopping the shooter. pic.twitter.com/WD68oepEaE

One neighbor of the church told WKRN-TV that shooting victims showed up at her door. It’s not clear who they are.

“There’s two people that come up to our door and say ‘someone is shooting at us at the church,’” she said. “(Her husband) called 911 and told the police, the station, there was a shooting at the church. … We had heard something, I was in the back of the house and it sounded like a wreck, but it wasn’t a wreck.”

She added that her husband went back to the church and found victims in the parking lot and in the church with gunshot wounds.

The Burnette Chapel Church of Christ, which is located in Antioch, holds a service on Sunday mornings.

Loading more stories
wpDiscuz
1
0
Would love your thoughts, please comment.x
()
x
| Reply
Joey Spann is the minister at Burnette Chapel Church in Antioch, Tennessee, which was the site of a mass shooting. Spann and his wife, Peggy, may have been among the victims.