A Florida sheriff’s deputy and corrections officer were both killed after crashing head-on Sunday morning during Hurricane Irma in Hardee County, the Miami Herald reports.

Deputy Julie Bridges, 42, of the Hardee County Sheriff’s Office and Sergeant Joseph Ossman, 53, who worked for the Florida Department of Corrections, died in the crash early Sunday morning, authorities said.

Deputy Julie Bridges was leaving an evacuation shelter in Hardee County. She was headed home to get supplies before returning to the shelter, according to the sheriff.

“She worked the shelter all night and was going home to retrieve some more items and then go back to the shelter,” Sheriff Arnold Lanier told the Herald-Advocate.

Sergeant Joe Ossman was reporting to work at the Hardee Correctional Institute, the Florida Department of Corrections said. The facility was not evacuated and is staying open during the storm.

The crash happened about 6:45 a.m. at State Road 66 and Old Crewsville Road in Hardee County, the Florida Highway Patrol says. No other vehicles were involved and both Bridges and Ossman were the sole occupants of their vehicles, police said.

2. There Was High Wind & Rain During the Crash, but Whether Hurricane Irma Played a Role Is Under Investigation

Heartbroken for @hcsheriff and @FL_Corrections in the loss of Hardee Deputy Bridges and DOC Sgt Ossman who were killed in a crash this AM pic.twitter.com/XfpbROVTSa

There were high, gusty winds and heavy rains in the Hardee County area at the time of the crash, but whether those effects of Hurricane Irma played a role in what happened is still under investigation, Fox News reports.

The crash is being investigated by the Florida Highway Patrol. Further details about what happened have not been released.

“Our thoughts and prayers are with the Hardee County Sheriff’s Department, the Florida Department of Corrections and their families,” the Highway Patrol said in a statement.

3. Bridges, Who Is Survived by Her Young Son, Was a 13-Year Veteran of the Sheriff’s Office

FacebookDeputy Julie Bridges and her son in July.

Deputy Julie Bridges was a 13-year veteran of the Hardee County Sheriff’s Office, WFLA-TV reports. She is survived by her 8-year-old son, according to her Facebook page. She was a member of the sheriff’s office’s Honor Guard, according to its website.

Bridges lived in Wauchula and was originally from Sarasota, according to her Facebook page.

4. Ossman Had More Than 21 Years of Experience With the Florida Department of Corrections

Sergeant Joseph Ossman had more than 21 years of experience with the Florida Department of Corrections, according to the Association of State Correctional Administrators.

“It is with a heavy heart that I must notify you of the untimely passing of Sergeant Joseph Ossman who was involved in a vehicle accident while reporting to work this morning,” the DOC said in a statement. “Our Chaplain is on duty and will begin providing grievance counseling to our staff.”

Ossman, of Sebring, worked at the Hardee Correctional Institute.

“We are heartbroken by this loss, and our thoughts and prayers are with his family and fellow officers at this time,” Corrections Secretary Julie Jones said in a statement to the Miami Herald.

Florida Governor Rick Scott said in a statement, “I am heartbroken to learn of the loss of these two individuals in a traffic accident today. Our law enforcement and correctional officers work every day to keep Floridians safe. It is because of their work we are able to live in a state where people can raise their families safely. My heart goes out (to) their families and the entire law enforcement and correctional community.”

5. There Have Been At Least 3 Deaths During Irma in Florida After At Least 22 Were Killed in the Caribbean During the Storm

Hurricane Irma Death Toll Rises After Historic Devastation | The Last Word | MSNBCNBC's Cal Perry has the latest on Irma's devastation in the Caribbean, where the death toll has risen to at least 20 people and where islands nations have had buildings, including hospitals and schools, completely destroyed. » Subscribe to MSNBC: http://on.msnbc.com/SubscribeTomsnbc About: MSNBC is the premier destination for in-depth analysis of daily headlines, insightful political…2017-09-09T04:20:58.000Z

There have been at least three deaths during Hurricane Irma in Florida, including the deaths of Deputy Bridges and Sergeant Ossman, according to ABC News. The third death occurred in Monroe County, Florida, on Saturday, when a driver lost control of his truck during high winds while transporting a generator, the news network reports.

Another man was killed in Davie, Florida, before the storm after he fell off a ladder while putting up storm shutters.

Hurricane Irma resulted in at least 22 deaths in the Caribbean as it made its way to Florida, according to the Miami Herald. 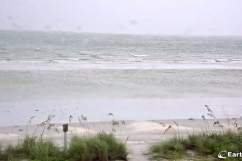