Where is the La Tuna / Burbank fire now? The La Tuna Fire began on the north side of La Tuna Canyon Road in California around 1 p.m. local time on Friday, ABC 10 reported. But then it quickly spread east and across the 210 Freeway. By late Saturday morning, the fire had spread to nearly 5,000 acres and was only 10 percent contained. Officials said the fire would burn at least into Saturday, but they were hopeful that they could get it under control. As of Saturday afternoon, the LAFD had reported that approximately 300 homes in Burbank, 250 in Glendale, and 180 in Los Angeles were under evacuation notice.

Here is the most updated map as of Sunday afternoon, shared by the City of Glendale and the Altadena Station of the Los Angeles County Sheriff’s Office

To learn more about the fire’s location and size, as of Sunday Sept. 3, see our updated story here.

Nearby residents were worried as they saw the fire on the horizon on Friday night and early Saturday morning:

The map above gives you an idea of just how close the La Tuna Fire flames are to nearby areas.

And here’s a Google Map, showing you where the La Tuna fire is in relation to the 210 Freeway, along with relevant evacuation centers:

Next is a map created by Shaela Druyon on Twitter, as of late Saturday morning. She made a Google map showing evacuation areas according to Burbank Police tweets and updates:

The 210 freeway was closed in both directions due to the fire’s spread. It will remain closed from Lowell to San Fernando Road, likely through Saturday morning, The OCR reported.

Here’s the current map of the fire, as of 4 p.m. local time on Saturday:

And here’s another map from the Los Angeles Fire Department from earlier on Saturday:

You can see how much it’s grown from the original fire burn area posted on Friday:

More than 250 LAFD firefighters will work through the night and helicopters will continue performing water drops. Crews from the Los Angeles Fire Department, The Angeles National Forest, the Los Angeles County and the Glendale Fire departments are working together to battle the fire, The OCR reported.

Below are evacuation maps for the affected regions:

BELOW ARE MANDATORY EVACUATION AREAS IN THE GLENWOOD OAKS + MOUNTAIN OAKS NEIGHBORHOODS. pic.twitter.com/UVEDOFeWA9

To read more about the areas being evacuated, see Heavy’s story below. 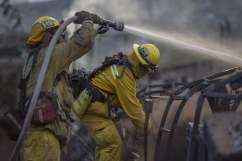 Loading more stories
wpDiscuz
2
0
Would love your thoughts, please comment.x
()
x
| Reply
See maps of the #LaTunaFire and #BurbankFire, to see where in La Tuna and Burbank, California the fire currently is located.