Video taken by an eyewitness of the Parsons Green train station explosion in London Friday appears to show the device in flames after it went off. Police are treating it as a “terrorist incident” and 22 people were treated for non-life threatening injuries.

The above video was posted by Sylvain Pennec, a softwware developer from Southfields. He later told the U.K. Independent that she heard a “loud boom” and saw “flames all around.”

“People started to run but we were lucky to be stopping at Parsons Green as the door started to open,” Pennec said. He saw commuters try to escape the train, “collapsing and pushing” each other. He stayed behind to take the video and see what the explosion was from.

“It looked like a bucket of mayonnaise,” he told the Independent. “I’m not sure if it was a chemical reaction or something else, but it looked home made. I’m not an expert though.”

Another Twitter user posted photos of the device after it had gone off. The photos also show flames still coming from it.

The explosion happened at around 8:20 a.m. local time, during rush hour in London. The train was an eastbound District Line train from Wimbledon. BBC security correspondent Frank Gardner said that the incident could have been “far worse,” since it looks like the bomb “may have partially failed.” The BBC also reports that the device had a timer. A manhunt for the suspect is already underway.

The Metropolitan Police classified it as a “terrorist incident,” but there have been no arrests. Counter Terrorism Command detectives are already working on the case. “We believe the fire was caused by the detonation of an improvised device, which is being forensically examined,” police said.

“Today and over the weekend the public can expect to see a heightened police presence, particularly in crowded places and at transport hubs,” Assistant Commissioner Mark Rowley said in a statement. “As always we urge the public to remain calm but alert; if they have any concerns, see or hear anything suspicious then please contact the police on the confidential hotline 0800 789 321. In an emergency always call 999.”

The National Health Service reported that 22 people were injured. The London Ambulance Service added, “None of these patients are thought to be in a serious or life-threatening condition.”

“The train was packed, and I was down the other side of the carriage standing up, looking at my phone and then I heard a big boom and felt this heat on my face,” Natalie Belford, a hairdresser who was on the train, told the New York Times. “I ran for my life, but there was no way out. The doors were full of people and the carriage was too packed to move down.” 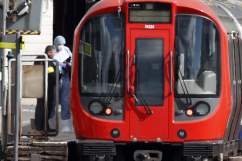