The wife of Treasury Secretary Steven Mnuchin is speaking out for the first time after she was widely criticized for her comments on Instagram last month.

In an exclusive interview with Washington Life magazine, in which she appears on the cover, Linton said: “I deserved the criticism.”

Exclusive: #LouiseLinton covers our September issue and speaks out for the first time since her infamous IG post. https://t.co/FlNvD15UKc

Linton, a Scottish-born actress, posted a photo on her Instagram account on Aug. 21 of her flying on a government plane and used hashtags to namedrop several high-end designers she was wearing.

Jenni Miller, a mother of three from Portland, Oregon, responded: “Glad we could pay for your little getaway. #deplorable.”

Linton made headlines with her response to Miller:

Aw!!! Did you think this was a personal trip?! Adorable! Do you think the US govt paid for our honeymoon or personal travel?! Lololol. Have you given more to the US economy than me and my husband?

You’re adorably out of touch… your life looks cute… Go chill out and watch the new game of thrones. It’s fab! 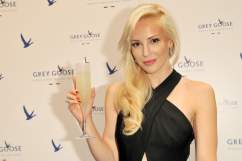 In the magazine interview, Linton said she’s had time to reflect on her actions.

“Something like this requires extreme thought and introspection and I had to absorb the criticism and figure out how I can influence the world in a positive way instead of how I did by making that post,” she told Washington Life.

“I don’t feel like a victim. I feel like the world gave me a good, hard wake-up call and I’m OK with that,” she added.

Linton also said that she was “the one who was truly out of touch” and said she “deserved the criticism.”

“I received the message loud and clear,” she said.