A Texas woman arrested on shoplifting charges managed to escaped from her handcuffs while in the back of a police vehicle and then stole the SUV, leading officers on a lengthy chase.

Toscha Sponsler, 33, “slipped her cuffs and climbed through a window partition to the driver’s seat. She then led officers on a 23-minute, 100 mph chase,” the Lufkin Police Department said in a statement.

Video of the incident, which you can watch above, was released by the police department this week. Sponsler was arrested on September 2 after the chase and charged with escape causing serious bodily injury/threat of a deadly weapon, aggravated assault against a public servant, possession of a controlled substance, evading arrest with a vehicle with a previous conviction and unauthorized use of a vehicle, police said.

Toscha Sponsler pictured in the back of the police SUV and then during the chase.

The video, which does not show the full pursuit, begins with Sponsler being taken into custody at the Ulta beauty store on Saturday, September 2, in Lufkin, according to the police department. Officers were called to the store for a report of a possible shoplifter. Sponsler was cuffed behind her back and put into the back of the patrol vehicle while “officers went through her bags of stolen goods,” Lufkin police said.

The video then shows Sponsler slipping out of her seat belt and mumbling to herself in the back of the police vehicle. She then slips out of her handcuffs and looks around before climbing into the front seat.

Body camera video from outside the vehicle recorded by officers who were going through the bag of items Sponsler allegedly stole shows Sponsler speeding off as the officers try to stop her. “God dang,” one officer says, as another tries to open the passenger door.

“Sponsler nearly went head on with two Lufkin officers and a Huntington constable during the pursuit. Throughout the chase, officers could see her reaching for the officer’s shotgun which was mechanically locked to the vehicle,” police said.

The chase ended in Zavalla, Texas, “after a DPS Trooper used a PIT maneuver to make her lose control of the vehicle.”

The video ends with a Lufkin officer installing a “A” in a patrol vehicle, and a note saying that the device has been put into all marked vehicles. “#FoolMeOnce” then appears on the screen.

Toscha Sponsler is being held at the Angelina County Jail.

Sponsler remains in custody on $18,000 bail at the Angelina County Jail. Police said she refused medical treatment. They say she was found to be in possession of methamphetamine after she was taken into custody following the pursuit. Court records show she has several previous arrests.

“We are fortunate that no one was hurt during the incident,” Lufkin Police Assistant Chief David Thomas told KETK-TV. “Although we haven’t had anything like this happen in the past we will conduct an internal investigation to review the incident for training or tactical deficiencies.”

The police SUV was likely totaled, Thomas told the news station. The incident remains under investigation. 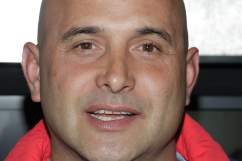