Irma is expected to make landfall somewhere in south Florida as a Category 4 storm this weekend. The current map (above) on the National Hurricane Center’s website has Irma splitting the Sunshine State down the middle, coming in somewhere near Miami and driving straight between Orlando and Tampa. This track would bring hurricane conditions to most of the state, starting as a Category 4 in southern Florida, and weakening down to a Category 1 before it exits the state and heads into Georgia.

Other states northwest of Florida are expected to feel Irma’s wrath, but she will more than likely slow to a tropical storm before that happens.

Below are images and graphics from the latest GFS update as of 12 p.m. Eastern on Friday.

“GFS continues to show Irma moving right up the East coast as a major hurricane. I will post my thoughts once the Euro runs in a few hours. If this verifies, just devastating for Miami. Looks just like what Matthew was supposed to do last year. Hopefully, the end result will be the same, just offshore,” said Tampa-based meteorologist Denis Phillips.

Below are images and graphics from the latest European update as of 2 p.m. Eastern.

Latest enhanced Euro model of #Irma at point of entrance into Florida. pic.twitter.com/I7zqETAV8f

“Based on a West track, interior counties of Hardee, Highlands and Polk will get the worst winds. Numbers of about 80 to 100 mph will be about right. If track is more East, the numbers will drop. Highly unlikely it goes more West. Winds closer to the coast will be about 60 to 70. Tampa will be in-between the 2. Again, this is based on the Euro’s track,” Phillips wrote on Facebook in the early hours of Friday morning.

As you can see in the map below, the majority of the state of Florida will experience hurricane force winds from Sunday through Tuesday. 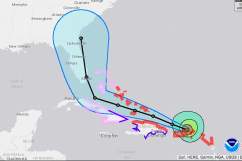 Loading more stories
wpDiscuz
2
0
Would love your thoughts, please comment.x
()
x
| Reply
The state of Florida is bracing for impact as Hurricane Irma is set to split the state down the middle.