NHC/NOAAHurricane Maria forecast at 11 a.m. from the National Hurricane Center.

The 11:00 a.m. National Hurricane Center public advisory reports that Maria is moving west-northwest at 10 mph (17 kmh), with maximum sustained winds at 160 mph (260 kmh). That means it is still a Category 5 hurricane. It is located about 150 miles (240 km) southeast of St. Croix in the U.S. Virgin Islands, which are just 80 km away from the British Virgin Islands.

No track for #Maria is good at this point. #USVI, #PuertoRico, and/or #BVI will be devastated. Core expanding = someone gets worst. pic.twitter.com/OZMmpijqVk

The British Virgin Islands, the U.S. Virgin Islands and Puerto Rico remain under a Hurricane Warning. This “means that hurricane conditions are expected somewhere within the warning area. Preparations to protect life and property should be rushed to completion.”

The NHC warns that Maria will bring a dangerous storm surge as it passes over the Leeward Islands and the BVI. “A dangerous storm surge accompanied by large and destructive waves will raise water levels by as much as 7 to 11 feet above normal tide levels in the hurricane warning area near where the center of Maria moves across the Leeward Islands and the British Virgin Islands,” the NHC notes.

BVI Emergency Shelters. Persons living in low-lying areas, near ghuts or near the coast should be cognizant of these locations and move now. pic.twitter.com/gGTcItJiHm

The center also expects the storm to drop 10 to 15 inches of rain on the U.S. and British Virgin Islands. Some isolated areas might see as much as 20 inches.

The NHC notes in its 11 a.m. discussion:

A weak ridge situated over the western Atlantic is expected to steer Maria west-northwestward through 48 hours, and on this track the center of the hurricane is forecast to pass near or over the Virgin Islands and Puerto Rico on Wednesday. After that time, the western portion of the ridge is forecast to weaken, partially due to the influence of the large circulation of Hurricane Jose off the U.S. east coast. This pattern should cause Maria to turn northwestward and then north-northwestward by days 4-5.

The BVI and USVI were hit hard by Hurricane Irma earlier this month, and Maria is expected to be just as devastating, if not worse. Sir Richard Branson, who owns the private Necker Island in the BVI, is calling for a “Marshall Plan” for the BVI to provide hurricane relief.

“These hurricanes are causing unimaginable destruction; in the BVI infrastructure has collapsed, but we are working hard with some incredible partners, from the Royal Marines to aid agencies, the Puerto Rican authorities to the local BVIslanders, to help get the islands back on their feet,” Branson said in a statement.

Benito Wheatley, who represents the BVI in the U.K. and EU, told the Guardian that residents are “preparing for the worst.”

“We know it [Maria] is going to come very, very close,” Wheatley said. “We are preparing for the worst that is what we have to do, given the very vulnerable state of the communities there. Even if it’s not a direct hit, you can imagine that just a storm of that size coming anywhere near the BVI in it’s current condition could be very damaging.” 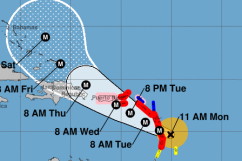 Read More
Hurricane Maria, U.K.
wpDiscuz
0
0
Would love your thoughts, please comment.x
()
x
| Reply
Hurricane Maria is moving closer to the British Virgin Islands. Here's a look at the latest forecast for the islands and where Maria is heading.