Melania Trump has arrived in Florida with her husband, President Donald Trump, following Hurricane Irma. The FLOTUS and the POTUS had made plans to visit the Sunshine State after Irma made landfall in Marco Island as a Category 4 storm, leaving flooding and destruction in her wake.

The intense storm split Florida down the middle, causing damage to both coasts.

The Trumps flew into Fort Myers on Thursday morning and then planned to head to Naples to survey the area, which was hard hit hard by the hurricane.

“At least 17 people in Florida have died under Irma-related circumstances, and police are investigating the deaths of eight nursing home patients who died of heat-related causes following the loss of air conditioning after Irma,” reports USA Today.

Upon boarding Marine One at the White House, the First Lady was seen wearing black-and-cream-hued Chanel flats, beige ankle pants, and a black jacket. Just about everyone was paying attention to Mrs. Trump’s outfit, since she was slammed for wearing high heels on her way to Texas following Hurricane Harvey. She changed into sneakers upon arriving, but the media (both social and mainstream) had already picked her apart for her attire.

Melania changed her outfit before her arrival, stepping on solid ground wearing an olive green button down, white pants, and a white ball cap. She also traded her Chanel flats for white sneakers.

‌”I just want to thank everybody, the first responders, on behalf of myself, our Vice President, Melania really wanted to be with us. It has really touched her heart, what’s gone on. And we’ve seen the devastation. We’re going to see some more of it now, unfortunately,” Trump said upon arrival.

After speaking to the media, the President and the First Lady went to the Naples Estates neighborhood where they put gloves on and handed out food to residents in the area. 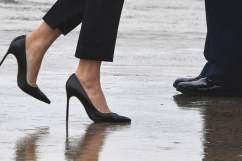