A 7.1 magnitude earthquake hit Mexico City on Tuesday, killing more than 200 people. Dozens of buildings collapsed and rescue workers and volunteers are scrambling to find survivors in the rubble.

The epicenter of the earthquake was about 5 miles east-northeast of Raboso, Mexico, according to the U.S. Geological Survey.

This incredible drone footage shows the devastation caused by the massive earthquake.

This drone footage shows the devastation caused by the 7.1 magnitude earthquake in Mexico. pic.twitter.com/zI9IbOXFPE

Mexico: Drone captures desperate rescue operations in Mexico CityDrone captured the ongoing rescue operations in Mexico City, early Wednesday morning, after a 7.1 earthquake struck the country. The disaster has so far claimed the lives of at least 224 people, according to the latest announcement from the Interior Ministry. Video ID: 20170920 021 Video on Demand: http://www.ruptly.tv Contact: cd@ruptly.tv Twitter: http://twitter.com/Ruptly Facebook: http://www.facebook.com/Ruptly2017-09-20T08:19:31.000Z

The New York Times has mapped out several buildings that have collapsed in and around Mexico City. 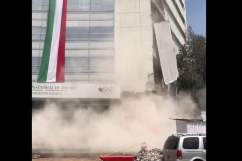 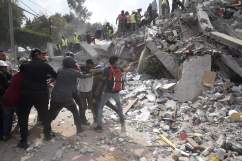