A massive earthquake measuring 8.1 on the Richter scale struck near the southern portion Mexico during the late hours of Thursday evening.

The quake hit off the coast of Mexico near its border with Guatemala at 11:49 p.m. ET, the U.S. Geological Survey reported.

Just over one hour following the earthquake, the Chiapas Governor confirmed at least three people were killed as a result of the quake.

Governor of the Mexican state of Chiapas says at least three people have been killed following an earthquake measuring magnitude 8.1

There haven’t been many other concrete reports on any injuries or the extent of the damage as of yet. But judging by photos and videos posted to social media, it tragically appears to be widespread.

The extent of the damage is currently unknown, but USGS geophysicist Jana Pursely told CNN she believes there will be some damage near the coast of Chiapas.

Such a large earthquake figures to be followed by a number of aftershocks, which can often be deadly. So far, four of them have been reported with tremors measuring above 5.0. A fifth one measured 4.9.

Social media users say that the 8.1 quake was felt as far as Mexico City and Guatemala City and the USGS measured it as having a depth of around 43 miles. While there are no immediate signs of tsunamis, the Pacific Tsunami Warning Center is monitoring the area for possible occurrences. Officials have also warned that there’s a threat that tsunami waves could hit off the coasts of central America within three hours after the earthquake.

The quake comes at a time when Hurricane Irma has formed in the Atlantic Ocean and pummeled much of the Caribbean. As that approaches the U.S., Hurricane Katia is in the Gulf of Mexico and made landfall in the northeastern part of the country. Those storms come just about two weeks following Hurricane Harvey‘s catastrophic winds and rainfall, which left many parts of the Houston, Texas area temporarily inhabitable.

For context, the strongest earthquake ever to occur registered 9.4-9.6 on the Richter scale in Valdivia, Chile in 1960. Other than that, there have been four quakes that have registered over a 9.0 and dozens of them being over 8.0. The largest one most recently was in the Tohoku region of Japan, when a 9.1 quake devastated the area on March 11, 2001. That earthquake and the ensuing tsunamis killed 15,894 people and injured another 6,152.

This is from an office in Mexico City hit by the 8.4 earthquake.pic.twitter.com/PRkKUDsfEl

Patients and doctors flee a hospital in Mexico City after the earthquake struck https://t.co/W0OKEonncf pic.twitter.com/7r90bEcn3D

Yo wtf is this… #Earthquake pic.twitter.com/kcxq5lRWuC

Tsunamis are possible in central America after a magnitude 8.1 earthquake hit off the southern coast of Mexico pic.twitter.com/2Hd9ju8J72 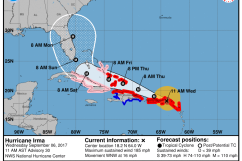 Read More
Breaking News, earthquake
An earthquake measuring 8.0 on the Richter scale has struck parts of southern Mexico. See photos and videos from the areas effected.