Twitter An earthquake measuring about 8.0 on the Richter scale struck off the coast of southern Mexico on Friday.

An earthquake measuring 8.1 on the Richter scale hit off the southern coast of Mexico during the late hours of Thursday evening. It struck near Mexico’s border with Guatemala, and many cities hundreds of miles away could feel the effects, the U.S. Geological Survey reported.

“This was a very, very strong earthquake, one of the strongest I’ve felt, and I was here in 1985 when that earthquake collapsed Mexico City,” Paulaina Gomez-Wulschner told CNN.

Social media accounts say the quake was felt as far away as Mexico City and Guatemala City and had a depth of around 43 miles.

Just over one hour following the earthquake, the Chiapas Governor confirmed at least three people were killed as a result of the quake.

Governor of the Mexican state of Chiapas says at least three people have been killed following an earthquake measuring magnitude 8.1

There haven’t been many other concrete reports on any specific number of injuries, deaths or the extent of the damage as of yet. But judging by photos and videos posted to social media, it tragically appears to be widespread.

According to the USGS, the quake struck at 11:49 p.m. Eastern southwest of Tres Picos, Mexico. That area is 600 miles southeast of Mexico City and was close to Chiapas and Oaxaca.

One particular video was captured from an office building. It shows the absolute force of the earthquake. In it, the overhead lights can be seen shaking violently with an eerie sense of silence. Watch the video from inside the office during the enormous quake below.

About one hour after the 8.1 quake, four aftershocks with tremors measuring over 5.0 on the Richter scale and a fifth at 4.9 were reported.

The quake comes at a time when Hurricane Irma has formed in the Atlantic Ocean and pummeled much of the Caribbean. As that approaches the U.S., Hurricane Katia is in the Gulf of Mexico and made landfall in the northeastern part of the country. Those storms come just about two weeks following Hurricane Harvey‘s catastrophic winds and rainfall, which left many parts of the Houston, Texas area temporarily inhabitable.

For context, the strongest earthquake ever to occur registered 9.4-9.6 on the Richter scale in Valdivia, Chile in 1960. Other than that, there have been four quakes that have registered over a 9.0 and dozens of them being over 8.0. The largest one most recently was in the Tohoku region of Japan, when a 9.1 quake devastated the area on March 11, 2001. That earthquake and the ensuing tsunamis killed 15,894 people and injured another 6,152. 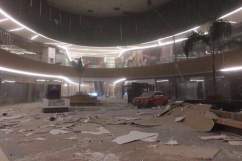 Read More
Breaking News, earthquake
An earthquake measuring 8.0 on the Richter scale struck the southern part of Mexico early Friday morning. Watch a video of it shaking an office building.