Miami police took to social media for the modern equivalent of making an accused criminal walk around in public with a sandwich board. They posted a photo of a group of accused looters to their Twitter page as the city and rest of Florida dealt with the trauma of Hurricane Irma.

Police wrote: “Thinking about looting? Ask these guys how that turned out. #stayindoors.” They included a photo of the accused group of looters, who were sitting in a police holding area. Miami PD did blur out the accused looters’ faces. See the tweet:

Thinking about looting? Ask these guys how that turned out. #stayindoors pic.twitter.com/7m42B0KFr4

Those weren’t the only accused looters whose photos ended up on Miami police Twitter, either. Police announced more arrests on looting accusations. Miami-Dade County Police Department arrested at least 28 people for looting during Hurricane Irma.

Police also posted about other topics relating to Hurricane Irma on Sunday night, including flooding, and the organization of assessment teams to survey the damage in Miami.

Starting recovery from #Irma tonight. 5 initial damage assessment teams are going out to canvas the city so that cleanup can begin tomorrow pic.twitter.com/U7Ka1RJmka

There was a curfew in Miami on Sunday, police reminded the community. “Curfew is 7pm-7am. As night sets in we’d like to remind you to be patient /stay indoors. Visibility is close to ‘0’ dangers can be unseen,” they wrote.

Miami was spared the landfall of Irma (that happened in the Keys and then Marco Island on the southwestern coast), but the city did suffer damage.

NBC New York reported, “In Miami, an NBC 6 reporter saw an organized group of at least a dozen suspected looters at a store in Midtown loading up boxes of shoes and clothing into cars.” In addition, a South Florida deputy shot an accused teen burglar during the storm, reported the television station. 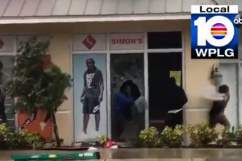