A big pro-Trump rally called “The Mother of All Rallies” (or MOAR for short) is taking place today in Washington, D.C. These are photos from the event, to give you an idea of what is happening today.

GettyDemonstrators dance during the pro-Trump ‘Mother of All Rallies’.

The MOAR rally began its opening ceremonies at the north end of the Mall, near the Washington monument, at 11 a.m. Eastern, according to their website.

“Keynote speakers will include author Hamody Jasim, Marco Gutierrez founder of Latinos for Trump, and congressional candidate for California Omar Navarro. The band Madison Rising is the featured performer.  Panel discussions on a number of hot topics are also planned and much will be happening throughout the day and evening.”

GettyMore scenes from the rally.

Peter Boykin, president of Gays for Trump and a speaker at the rally, told the Washington Post that some topics discussed at the event will be more controversial, including transgender men and women in the military, Sharia law, and the dreamers immigration program.

GettyA man dressed as Captain America speaks to a demonstrator during the pro-Trump ‘Mother of All Rallies’.

According to the event’s website, the rally is focused on freedom, putting America first, and uniting everyone under the American flag:

…No confederate flags, communist flags, or foreign flags allowed. This is not a Democrat or Republican rally. It’s not a left or right rally. We condemn racists of all colors and supremacy of all colors. Our patriots are of all colors and we are uniting under our constitutional rights. We are Americans and our color shouldn’t matter.”

The event’s Facebook page mentions that the event is “in support of American values, American culture, American traditions, and of course President Donald Trump.”

About 2,000 people RSVP’d for the event on Facebook, and an additional 6,200 indicated that they were interested in the event. The organizers originally wanted one million people at the event.

GettyDemonstrators wave national flags and placards during the pro-Trump Mother of All Rallies.

But both Jason Webber, an organizer of the Juggalo rally, and Peter Boykin, a speaker at the MOAR rally, told The Washington Post that their events don’t plan to interact with each other and they don’t expect any brawls.

Supporters have also been posting on Twitter and other social media sites about the event.

We're on our way to join our #MAGA family at the #MOAR rally in DC! #OneUnitedAmerica pic.twitter.com/jprMpWJ8zm

Mother of all Rallies #MOAR cranking up.

Not the rally for you

GettyUS Park Service Police at the Pro-Trump Rally on the National Mall on September 16, 2017.

Some counter protesters showed up too:

Counter-protester with a Heather Heyer sign at the #MOAR pro-Trump rally pic.twitter.com/7i5I7GpaDE

The website for the event took pains to set itself up as different from the Charlottesville rally, saying that they wanted American flags and Confederate flags would not be allowed.

GettyPro-Trump security forces try to keep people away on the National Mall on September 16, 2017.

The event was also heavily pro-Trump.

Spotted at the #MOAR rally in DC! Love it! pic.twitter.com/bYSysKtks9

Awesome day at #MOAR Rally. A day of Peace and Unity! Thank you for being so awesome #truepatriots #freedomrocks pic.twitter.com/VDpXNvrscL

GettyPro-Trump supporters during the national anthem.

GettyAnti-Trump protesters at the Pro-Trump Rally. 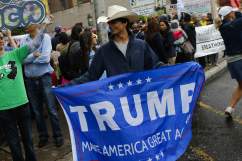 ‘Mother of All Rallies’ MOAR Rally: 5 Fast Facts You Need to Know

Loading more stories
wpDiscuz
9
0
Would love your thoughts, please comment.x
()
x
| Reply
These are photos and scenes from the pro-Trump "Mother of All Rallies" event in Washington, D.C. today.