(Reddit / A man rides the D Line with a Nazi armband.

Two photos shared by different people show a man in Seattle riding the RapidRide D Line wearing a Nazi armband. A later photo shows the man knocked out on a sidewalk from a punch.

According to BuzzFeed, the man was tracked via the photos on social media by Antifa, which led to him being punched.

The Nazi armband-wearing man knocked out on a sidewalk.

Video of the Nazi armband-wearer being punched was shared shortly after the above photos. The second photo was shared first on Facebook by Sean Patrick Duff, but has since been posted by others. It is unclear who took the original video, which has since been deleted from YouTube. However, copies have made their way online and it can be viewed below.

Duff told BuzzFeed, “I literally just got off a bus and was walking to a movie and saw some guy being obnoxious up the way. Which I’m used to in downtown Seattle, but then I saw the Nazi armband and realize we are dealing with a guy a little more than just obnoxious. I had eaten over 800mg of THC and was way too high for confrontation so I just held back with two other passersby to watch what would unfold.”

In the video, the man wearing the swastika is talking about welfare to another man obefore he is cold-cocked. A voice off-camera says, “Night night.”

According to reports, the incident occurred near the famous Pike Place Market.

The incident is not under investigation because no one reported a crime, police told the Seattle Times.

In a series of tweets, Seattle Police said officers were called to reports of a man wearing a swastika armband instigating fights in the area of 3rd Avenue and Pine Street about 4 p.m. Sunday. Police said the officers were on scene about five minutes later and found the man “on the ground.” According to police, the man “declined to provide info about incident” to the officers “left after removing his armband.”

Police added, “No one else at the scene contacted officers to make a report about the incident.”

Seattle has seen its fair share of “alt-right” rallies, with the last one occurring last month after the Charlottesville terror attack. During that attack, a white supremacist ran a car through a crowd of Nazi counter-protesters, injuring 19 and killing one woman, Heather Heyer.

According to NBC, the Seattle rally was organized by Joey Gibson of the pro-Donald Trump group Patriot Prayer. During the rally, police and protesters clashed, but no serious injuries were reported.

The Pacific Northwest itself has been a bastion of white supremacist thought. In the 1980s, the Northwest Territorial Imperative was popularized by Richard Girnt Butler, the late leader of the Aryan Nations. The Northwest Imperative encourages its white followers to relocate to Washington, Oregon, Idaho, Wyoming, and Western Montana to establish an Aryan homeland. 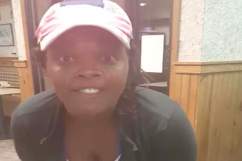 WATCH: Woman Attacks Veteran for Having PTSD Dog in Restaurant

Loading more stories
wpDiscuz
32
0
Would love your thoughts, please comment.x
()
x
| Reply
Two photos shared by different people show a man in Seattle riding the RapidRide D Line wearing a Nazi armband. A later photo shows the man knocked out on a sidewalk from a punch. A video later emerged.