Peter and Leela Daou are co-founders of Verrit, a new media platform whose endorsement by Hillary Clinton allegedly caused a denial-of-service attack that took the site down. Peter Daou was raised in Lebanon, where he served in the country’s military before arriving to the U.S., while his wife is of South Indian descent and was born in New York.

Prior to the Verrit venture, Daou, a former digital strategist to Clinton, worked as a writer, activist and as a producer/engineer. The native of Lebanon worked on the campaigns of Clinton, Arlen Specter and John Kerry.

Here are some facts you need to know about Peter and Leela Daou:

1.  An Endorsement of the Daous’ New Media Platform Verrit by Clinton on Sept. 3 Led to a Cyber-attack Within Hours.

Ex-Clinton adviser: Press was unfair to HillaryTucker takes on a former Clinton adviser who says the White House press corps owes her an apology for their coverage of her presidential campaign #Tucker2017-05-06T01:00:55.000Z

Hackers are evidently no fans of Verrit, Peter Daou, Clinton, etc. Shortly after Clinton tweeted her endorsement of the nascent platform, Daou tweeted the site was under cyber-attack. Daou has worked on Clinton’s campaign and Verrit is being marketed as “a media platform for the 65.8 million.”

Hillary endorsed @verrit and it was hit with a DDOS attack. Even though the site is down, WE HAVE 11,000 NEW TWITTER FOLLOWERS in 2 hours.

Hillary Clinton endorsed @Verrit, our new media platform, an hour ago and we've already been subjected to a denial-of-service attack. https://t.co/rVVVp3tOEU

Once again, we've confirmed a DDOS attack on @verrit after Hillary Clinton endorsed the platform. We'll get it back up ASAP. Thanks! https://t.co/jSo0a3lpQC

2. Daou Was a Co-founder of #HillaryMen, A Digital Movement Created To Fight Off Sexism During the 2016 Presidential Campaign. 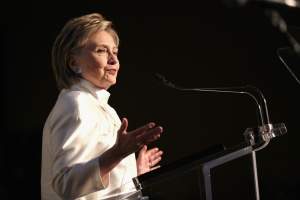 Together with Columbia University lecturer Tom Watson, Daou created #HillaryMen, described by Yahoo News! as “the unlikely site is a coalition of ‘fathers, brothers, husbands and sons’ dedicated to dissecting the discussion around Clinton’s campaign with an eye toward identifying and fighting back against sexism in campaign 2016.”

Daou told Yahoo! News the idea behind the group was to generate discussion for men by men around the possibility of a female POTUS:

“A lot of the motivation we have is to create that safe space for men across the country for any political conversation. We are men and we support Hillary for very specific reasons that we’ve laid out. We’d love to create a place where other men are not afraid to do it.”

3. In the 90s, The Daou Was a New York-based Dance Music Quintet Featuring Peter Daou As Keyboardist.

Before his foray into politics, Peter Daou was a keyboardist and producer in a dance music quintet named after his last name: The Daou. The group featured Vanessa Daou as a vocalist, and was comprised of bass player Leon Dorsey, guitarist Mike Caro and former 24-7 Spyz member Anthony Johnson on drums. The band was signed to Columbia Records.

The quintet’s debut single “Surrender Yourself,” from the album Head Music, stayed at the No. 1 slot on the U.S. Hot Dance Club Play chart for 11 weeks in 1992. Soon after, Peter Daou decided to leave Columbia and release the quintet’s next two singles via indie label Tribal Records. The Daou broke up soon after that, although Peter Daou would go on to produce Vanessa Daou’s solo album Zipless in 1994.

4. Daou Was Raised in Lebanon, Where He Served in the Country’s Military Before Arriving To the U.S. 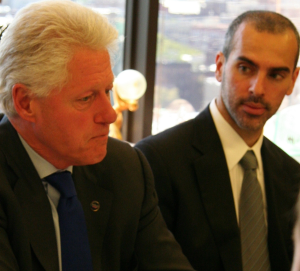 A native of Lebanon, Daou moved to the U.S. and settled in Manhattan. Describing himself a “long-time Upper West Sider,” he moved to “lower Manhattan shortly after the September 11th attacks for a number of reasons, not least of which was a sense of solidarity with the victims, several of whom were friends,” he wrote on his blog.

Daou, who has a daughter from a previous relationship, met Leela Daoud in 2012 and she soon moved in with him in his apartment in Battery Park City.

A writer and activist born and raised in New York, Leela Daou is of South Indian heritage. She was a backer of Clinton in 2016 and has continued to speak out on race relations on her Twitter page.

Daou met Leela in 2012 and the couple began living together and were married four years later, Daou wrote on his website.

Read More
Media, Politics
Peter and Leela Daou are co-founders of Verrit, a new media platform whose endorsement by Hillary Clinton allegedly caused a denial-of-service attack that took the site down.