Today is the 16th anniversary of 9/11. On this day, we honor the lives of the people who died in this act of terror with inspirational words of strength from scripture.

On September 11, 2001, four coordinated terrorist attacks against the United States forever changed the course of history. Four passenger airliners were hijacked by 19 al-Qaeda terrorists with the intention of flying them into landmark buildings.

Honor their victims today with this scripture:

3. “I well remember them, and my soul is downcast within me. Yet this I call to mind and therefore I have hope: Because of the LORD’s great love we are not consumed, for his compassions never fail. They are new every morning; great is your faithfulness.” – Lamentations 3:20-23

4. “And we know that in all things God works for the good of those who love him, who have been called according to his purpose. For those God foreknew he also predestined to be conformed to the likeness of his Son, that he might be the firstborn among many brothers. And those he predestined, he also called; those he called, he also justified; those he justified, he also glorified.
What, then, shall we say in response to this? If God is for us, who can be against us? He who did not spare his own Son, but gave him up for us all—how will he not also, along with him, graciously give us all things? Who will bring any charge against those whom God has chosen? It is God who justifies. Who is he that condemns? Christ Jesus, who died—more than that, who was raised to life—is at the right hand of God and is also interceding for us. Who shall separate us from the love of Christ? Shall trouble or hardship or persecution or famine or nakedness or danger or sword? As it is written: “For your sake we face death all day long; we are considered as sheep to be slaughtered. No, in all these things we are more than conquerors through him who loved us. For I am convinced that neither death nor life, neither angels nor demons, neither the present nor the future, nor any powers, neither height nor depth, nor anything else in all creation, will be able to separate us from the love of God that is in Christ Jesus our Lord.” – Romans 8:28-39

5. “The Lord is my rock, my fortress and my deliverer; my God is my rock, in whom I take refuge, my shield and the horn of my salvation, my stronghold.” – Psalm 18:2

7. “Dear friends, let us love one another, for love comes from God. Everyone who loves has been born of God and knows God.” – 1 John 4:7

8. “I trembled inside when I heard all this; my lips quivered with fear. My legs gave way beneath me, and I shook in terror. I will wait quietly for the coming day when disaster will strike the people who invade us. Even though the fig trees have no blossoms, and there are no grapes on the vine; even though the olive crop fails, and the fields lie empty and barren; even though the flocks die in the fields, and the cattle barns are empty, yet I will rejoice in the LORD! I will be joyful in the God of my salvation. The Sovereign LORD is my strength! He will make me as surefooted as a deer and bring me safely over the mountains.” – Habakkuk 3:16-19

9. “…But those who hope in the Lord, will renew their strength. They will soar on wings like eagles; they will run and not grow weary, they will walk and not be faint.” – Isaiah 40:31 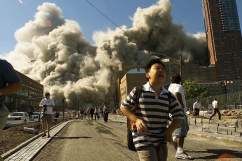 Is There an ISIS Terrorist Attack Threat for September 11, 2017?

Loading more stories
wpDiscuz
2
0
Would love your thoughts, please comment.x
()
x
| Reply
Today is the 16th anniversary of 9/11. On this day, we honor the lives of the people who died in this act of terror with inspirational words of strength from scripture.