Police say demonstrators in St. Louis sprayed “unknown chemicals” onto officers as they tried to control the violent protests Sunday.

The St. Louis County Police Department said they confiscated several bottles of the liquids and tweeted a photo. One bottled appeared to have “apple cider” written onto it. After the “unknown chemicals” were sprayed onto responding officers, the St. Louis Fire Department responded to decontaminated them and ensure safety.

Thx @STLFireDept for decontaminating our officers that had more unknown chemicals thrown on them downtown. pic.twitter.com/9XJQeoBKO7

Hundreds of protesters were demonstrating on the streets in the downtown area for the third-straight night after a judge’s not guilty ruling in a case where a white police officer shot and killed a black man after a pursuit in 2011.

Almost every night since Friday, the protests have turned violent. Police reported multiple incidents of protesters damaging property, looting businesses, blocking traffic and clashing with officers as they tried to disperse the crowd.

Criminals have caused serious property damage in the downtown area. This destruction will not be tolerated. #stlverdict pic.twitter.com/qNl2VwTVmp

Group near HQ throwing debris @ officers following a traffic stop. If group cannot be peaceful, they will be ordered to leave. #STLVerdict

On Friday, groups took to the streets after Judge Timothy Wilson’s not guilty verdict in a case involving Jason Stockley, a former St. Louis Police officer, and Anthony Lamar Smith.

Stockley and a partner said they saw Smith take part in what they thought was a drug deal in the parking lot of a fast-food restaurant on December 20, 2011. As the officers approached Smith, he fled in his vehicle, nearly clipping Stockley and the other officer, photos from surveillance cameras show. Stockley fired at least one shot at Smith as he led them on a high-speed pursuit.

A police dashcam video shows Stockley saying he’s “going to kill this (expletive), don’t you know it” while in pursuit of Smith.

Smith’s vehicle eventually slowed, and the officers decided to crash into his vehicle with theirs. Immediately after, Stockley got out of his car and fired five shots at Smith, which killed him. Prosecutors said Stockley planted a gun that was found on Smith afterward. Subsequent testing found Stockley’s DNA on the firearm but not Smiths.

Stockley said he acted in self defense when he shot Smith because he thought he was reaching for a weapon.

Wilson acquitted Stockley on Friday, saying in his ruling that the state failed to prove “beyond a reasonable doubt that Stockley did not act in self-defense.” 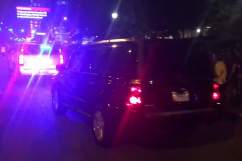