As many Americans stepped outside to watch the solar eclipse on August 21, Treasury Secretary Steven Mnuchin and his wife Louise Linton boarded a government plane and took in the historic event from the rooftop of Fort Knox in Lexington, Kentucky.

Now the Treasury Department is being sued by Citizens for Responsibility and Ethics in Washington, or CREW, for failing to disclose information about the trip to the public.

“We filed an expedited FOIA request because Americans deserve more information to determine whether there has been misuse of government resources,” CREW Executive Director Noah Bookbinder said in a statement. “We’re suing because the government has so far failed even to respond.”

BREAKING NEWS: We just sued the government over records for the Mnuchin/Linton eclipse trip. https://t.co/jmveuNEMC3 pic.twitter.com/Z7QvuqFo9g

CREW said it filed a Freedom of Information Act request two days after the eclipse. Mnuchin’s wife posted a picture to her Instagram account of her and her husband stepping off a government plane on their way to Kentucky on August 21 and used hashtags to namedrop several high-end designers she was wearing.

The post was criticized by a woman in Oregon, who wrote: “Glad we could pay for your little getaway. #deplorable.”

Aw!!! Did you think this was a personal trip?! Adorable! Do you think the US govt paid for our honeymoon or personal travel?! Lololol. Have you given more to the US economy than me and my husband?

You’re adorably out of touch… your life looks cute… Go chill out and watch the new game of thrones. It’s fab!

The post drew attention to their trip and it was reported that the couple used the government plane to fly into the path of totality to experience the solar eclipse.

The Treasury Department’s inspector general is investigating the trip, according to The Washington Post.

“We are reviewing the circumstances of the Secretary’s August 21 flight . . . to determine whether all applicable travel, ethics, and appropriation laws and policies were observed,” counsel Rich Delmar told The Washington Post. “When our review is complete, we will advise the appropriate officials, in accordance with the Inspector General Act and established procedures.”

Linton faced a huge backlash after her Instagram post. The Scottish-born actress told Washington Life magazine earlier this month that she was “the one who was truly out of touch” and said she “deserved the criticism.”

“I received the message loud and clear,” she said. 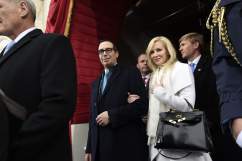 Louise Linton on Her Instagram Feud: ‘I Deserved the Criticism’

“At a time of expected deep cuts to the federal budget, the taxpayers have a significant interest in learning the extent to which Secretary Mnuchin has used government planes for travel in lieu of commercial planes, and the justification for that use,” Bookbinder said.

Read More
Eclipse, Government, Instagram, Solar Eclipse
Follow Heavy ↓
wpDiscuz
0
0
Would love your thoughts, please comment.x
()
x
| Reply
Citizens for Responsibility and Ethics in Washington filed a lawsuit against the Treasury Department "because the government has so far failed even to respond” to inquiries about the Aug. 21 trip.