Getty A general view of the exterior of a branch of the toy staore Toys R Us on September 19, 2017 in Luton, England. The company has struggled to compete against online traders such as Amazon and has announced that it has filed for bankruptcy protection in the US and Canada. The company has stressed that these actions do not expect any immediate impact on their European branches due to the company running the operations independently.

Toys R Us has filed for Chapter 11 bankruptcy protection. The announcement was made Monday evening in federal court in Richmond, Virginia.

In a statement, chairman and CEO Dave Brandon said, “Today marks the dawn of a new era at Toys ‘R’ Us where we expect that the financial constraints that have held us back will be addressed in a lasting and effective way.” News of the filing comes just ahead of the holiday season– the store’s busiest and most profitable time of year.

1. The Company Has Filed for Chapter 11 Bankruptcy

People wait in line to shop at the Toys R Us in Times Square on November 27, 2014 in New York, United States. Black Friday sales, which now begin on the Thursday of Thanksgiving, continue to draw shoppers out for deals and sales.

Unlike chapter 7 bankruptcy, in which the company shuts down and assets are sold or liquidated to pay back debt, Toys R Us has filed for chapter 11 bankruptcy. This means that the company will continue to operate, but will restructure its debts and assets by renegotiating the terms of debt. The 1,600 Toys R Us stores worldwide will therefore continue to operate despite the filings.

In a statement made on Monday, the company said they hoped the Chapter 11 filing would help “fuel its aspirations to bring play to kids everywhere and be a best friend to parents.”

A woman leaves a Toys-R-Us store with a cart full of toys after shopping in Fairfax, Virginia on November 26, 2015, on a Black Friday sale that extended a day earlier into Thanksgiving evening. The US holiday shopping season kicks off with “Black Friday” — the day after the Thanksgiving holiday — with a frenzy expected at stores around the country as retailers slash prices.

To date, Toys R Us is more than $5 billion in debt, according to the New York Times.

The pressures the company faces are not new, and have threatened a handful of other companies as consumers’ shift to buying goods from Internet sites like Amazon.com. In 2005, the private equity firms of Kohlberg Kravis Roberts and Bain Capital purchased Toys R Us in a buyout of $6 billion.

3. Reports Suggest The Company Has Already Received a Commitment from Some Lenders

According to CNBC, Toys R Us has already received commitment from lenders. This includes a “JPMorgan-led syndicate for over $3 billion in debtor-in-possession financing.”

Restructuring debt, according to the outlet, will involve making changes to the Toys R Us website to focus on products that are’t as easily acquired on sites like Amazon.

4. Many Companies Are Threatened by Consumers’ Shift Towards Online Buying

A woman shops for a bargains during the Thanksgiving holiday on November 28, 2013.

Toys R Us isn’t the only company that has filed for bankruptcy in the wake of consumers turning to the Internet to buy products. The LA Times writes, “… several other retail chains that have sought bankruptcy protection because of the shift in retail spending habits, including shoe chain Payless ShoeSource Inc., children’s clothing seller Gymboree Corp. and jeans retailer True Religion Apparel Inc.”

The outlet adds on that rumors had been swirling for weeks that the toy store was struggling financially. Chief Executive David Brandon said in June that Toys R Us was “seeing significant weakness in demand for their products globally.” This was exacerbated by the fact that online vendors have been offering free shipping.

Make-A-Wish and ToysRUs surprise 7-year old Jeiden by revealing that his ultimate wish (to meet Optimus Prime��) is being granted, during a birthday celebration for World Wish Day at a ToysRUs on April 29, 2016 in Secaucus, New Jersey.

Toys R Us was founded by Charles P. Lazarus in 1948. At first, Lazarus was responding to the market’s demand for baby furniture. Within a decade, however, the company’s products shifted to toys for older children.

Toys R Us’ mascot, Geoffrey the Giraffe, made his debut in 1957 in print advertisements for the company. In 1984, Toys R Us became international. The first international store was opened in Canada.

To date, Toys R Us operates more than 600 international stores in countries including Australia, Canada, France, the Netherlands, Germany, Switzerland, and the UK, among others. 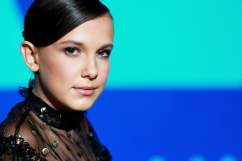 Loading more stories
wpDiscuz
0
0
Would love your thoughts, please comment.x
()
x
| Reply
Toys R Us has filed for Chapter 11 bankruptcy. Here's what you need to know.