Hurricane Maria has been making her way through the Atlantic and she is moving west northwest at 9 mph, with her sights set on Puerto Rico. Many of the islands that are currently in Maria’s path were directly affected by Hurricane Irma earlier this month, so another hit from such a powerful storm is almost unthinkable at this point.

Maria became a Category 1 hurricane on Sunday, September 17, and has since strengthened to a Category 5 storm — within 24 hours. She is currently located about 15 miles east southeast of Dominica. Maria is expected to impact several Caribbean islands including Guadeloupe, Dominica, St. Kitts, Nevis, Montserrat, Martinique, and St. Lucia over the next 24 to 48 hours.

The following map shows Maria’s projected path, according to the National Hurricane Center. Many of the islands in the Caribbean are within the cone of uncertainty, which could be absolutely devastating.

Maria is expected to maintain her strength as she moves onward toward Puerto Rico, but it is possible that she will weaken slightly, making landfall some time on Wednesday as a Category 4 storm. She will then move to the north of Hispaniola. From there, her exact path is unclear.

Below are graphics from some of the latest GFS models, which take Maria away from Florida. It’s important to keep in mind that this forecast is still about a week out and could change.

All depends on the trough placement. GFS trending slower and stronger on #Maria yet doing crazy things to the pattern! Can't show GIF since pic.twitter.com/dA8YXv8Nav

Hurricane Maria can intensify to CAT5.

Should be noted the past few GFS runs have shifted #Maria west because of high pressure moving in. pic.twitter.com/IpobzvCDd7

Below are the graphics from the latest Euro models, which run at 2 a.m. and 2 p.m. every day. The Euro models have spit out several possible tracks for Maria. The current run takes Maria out to sea. Interestingly, the Euro model also shows Maria interacting with Hurricane Jose later on in the week.

Everyone take a breath for now. Latest euro model for Maria pic.twitter.com/a0DeFctMJx

Just for reference, the European models seemed to be a better indicator when it came to Irma’s path. Many meteorologists across the country trust the Euro models and tend to think that they are more accurate than any of the other models. Below is a side-by-side comparison.

#Maria model trends today are more encouraging for the Carolinas. Most of the GFS/Euro ensemble members show it out to sea. Far from a lock! pic.twitter.com/03MYqoEpqs 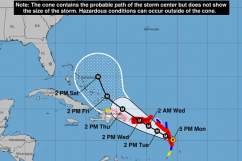 Loading more stories
wpDiscuz
2
0
Would love your thoughts, please comment.x
()
x
| Reply
Hurricane Maria is heading for Puerto Rico as a Category 5 storm. The GFS and Euro models have her taking different paths over the next 7 days.