President Donald Trump tweeted late Tuesday that he would “revisit this issue” if Congress doesn’t legalize DACA, the federal program that allows undocumented immigrants who arrived in the country with their parents at a young age to stay in the country.

DACA, or Deferred Action for Childhood Arrivals, was put in place in 2012 through an executive order signed by then-President Barack Obama.

Trump said he would scrap the program if Congress doesn’t act to legalize it within six months. Earlier Tuesday, Trump told reporters that he has “a great heart for the folks we’re talking about – a great love for them. And people think in terms of children, but they’re really young adults. I have a love for these people, and hopefully now Congress will be able to help them and do it properly.” 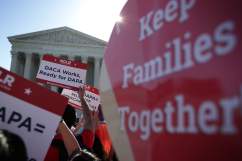 Obama issued a statement on the possible repeal of DACA, which could affect 800,000 people, on his Facebook page Tuesday.

“To target these young people is wrong – because they have done nothing wrong. It is self-defeating – because they want to start new businesses, staff our labs, serve in our military, and otherwise contribute to the country we love. And it is cruel. What if our kid’s science teacher, or our friendly neighbor turns out to be a Dreamer? Where are we supposed to send her? To a country she doesn’t know or remember, with a language she may not even speak?” Obama wrote. 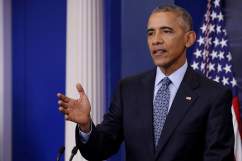