"We love you. You are special. We are here to take care of you," Trump said to the crowd.

President Donald Trump said this morning that Hurricane Irma, a Category 5 storm with maximum sustained winds of 185 miles an hour, “looks like the largest ever recorded in the Atlantic.”

Hurricane looks like largest ever recorded in the Atlantic!

Hurricane Irma made landfall around 2 a.m. Eastern time on Wednesday on the island of Barbuda.

Barbuda is now in the eye of devastating category 5 Hurricane #Irma pic.twitter.com/WTpdu5vQSS

How the hurricane will affect the mainland United States is still unclear. The state of Florida declared a state of emergency ahead of the storm.

Trump, who is heading to North Dakota on Wednesday to talk about his plan for tax reform, said his team is closely monitoring the massive storm.

Watching Hurricane closely. My team, which has done, and is doing, such a good job in Texas, is already in Florida. No rest for the weary!

Trump’s luxury island estate in St. Martin is in the path of Hurricane Irma. The 4.9-acre estate is on the market for $16.9 million, according to Sotheby’s International Realty. 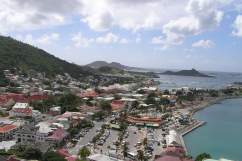 Trump’s Caribbean Estate in the Path of Hurricane Irma

And his Mar-a-Lago estate in Palm Beach, Florida, which he often calls the “Winter White House,” could also face damage if the hurricane hits Florida.

Read More
Donald Trump, Hurricane Irma
President Donald Trump said this morning that Hurricane Irma, a Category 5 storm with sustained winds of 185 miles an hour, "looks like the largest ever recorded in the Atlantic."