For the second time in less than a month, President Donald Trump is visiting a state devastated by a hurricane. Today, Trump and First Lady Melania Trump are in Florida to meet with the victims of Hurricane Irma. The Trumps will first visit Fort Myers before heading to Naples. You can watch videos from Trump’s trip below.

Trump is scheduled to arrive at the Southwest Florida International Airport in Fort Myers at around 10:40 a.m. He will then attend a briefing on recovery efforts before heading to Naples. At around noon, he is scheduled to meet with victims of the hurricane. He then heads back to Fort Myers to get back on Air Force One. He has to be in Washington by 7:00, since he’s hosting a dinner for the White House Historical Association.

Before heading to Florida, Trump praised recovery efforts on his Twitter page. “I will be traveling to Florida tomorrow to meet with our great Coast Guard, FEMA and many of the brave first responders & others,” Trump wrote on Wednesday. “With Irma and Harvey devastation, Tax Cuts and Tax Reform is needed more than ever before. Go Congress, go!”

On Tuesday, Trump added, “The devastation left by Hurricane Irma was far greater, at least in certain locations,than anyone thought – but amazing people working hard!”

Southwest Florida was one of the areas of the state hardest hit by Hurricane Irma. When Trump arrives in Fort Myers, he will see a city and county still reeling from its effects. The News-Press reports that there are still 600 people in shelters in Lee County, four days after the storm. The Federal Emergency Management Agency (FEMA) still hasn’t opened Disaster Recovery Centers and officials were slow to explain where residents can pick up food and water.

“This is not something we just roll in immediately right off the bat, because still, that life-safety, life-sustaining mission takes (precedence) over the Disaster Recovery Centers,” FEMA director Brock Long explained to the News-Press. “So it may take some time to get those in.”

Long told the News-Press that FEMA staffers were deployed to Lee County and other regions hit by the storm, but wouldn’t give specific numbers. He said around 39,000 federal officials were assisting with Irma response.

“The federal government is laying down a lot of resources. I think it just solidifies, we live in the greatest country in the world,” he said. “You’ve got pretty much every federal government agency trying to play a role to help out local communities like the one I’m standing in today.”

The death toll from Hurricane Irma has reached 31. This includes the eight people who died at a Hollywood, Florida nursing home after its air conditioning unit stopped working. 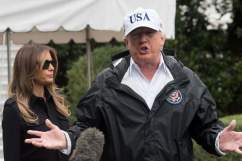 Loading more stories
wpDiscuz
0
0
Would love your thoughts, please comment.x
()
x
| Reply
President Donald Trump and First Lady Melania Trump are in Florida to visit the victims of Hurricane Irma. He will meet with officials in Fort Myers and Naples.