Today is the Victory Over Japan Day, AKA V-J Day, Victory in the Pacific Day, or V-P Day. The date commemorates the Empire of Japan surrendering to the United States and its allies in World War II, which officially ended the war. The surrender is celebrated on different dates internationally, with England, Australia, the Netherlands, North Korea, and South Korea celebrating it on August 15. The United States, China, and Taiwan celebrate Japan’s defeat on September 2.

This is because Japan surrendered on August 15, 1945, but the surrender document wasn’t signed until September 2.

Learn more about the history and origin of Victory Over Japan Day here:

JAMAL A. WILSON/AFP/Getty ImagesThe Enola Gay, the B-29 bomber used in the atomic mission that bombed Hiroshima, Japan, during World War II, on display at the Smithsonian Institution’s National Air and Space Museum in Washington, D.C.

The United States dropped atomic bombs on Hiroshima and Nagasaki on August 6 and 9. On August 9, the Soviet Union declared war on Japan, too. Nazi Germany had surrendered in May. After two atomic bombs and a new Soviet threat, Japan voiced its intent to surrender under the Potsdam Declaration on August 10. The Potsdam Declaration was the result of the Potsdam Conference, held in Berlin and attended by the leaders of the newly victorious Soviet Union, United Kingdom, and the United States.

Under the Potsdam Declaration, which was also contributed to by Chiang Kai-shek, Chairman of the Nationalist Government of China, Japan would face “utter devastation of the Japanese homeland” if they did not surrender.

The declaration also paved the way for democracy in Japan, promising its people “freedom of speech, of religion, and of thought, as well as respect for the fundamental human rights” once they surrendered.

2. Celebrations Began Immediately After Japan Surrendered Around the World

Even though it wasn’t official, celebrations about Japan intending to surrender caused celebrations around the world. According to an edition of Life magazine from August 20:

The people didn’t wait for an official announcement. A conga line of American and British soldiers wound slowly down Regent Street to Piccadilly Circus… Two Chinese soldiers were plucked from their car by GIs and carried shoulder-high into Regent Palace Hotel where a one-legged British officer used his crutch to conduct a throng of Americans singing “God Save the King.”

However, it wasn’t until August 15 that Emperor Hirohito announced that Japan accepted the Potsdam Declaration.

3. Emperor Hirohito Surrendered Mainly Because of the Atomic Bomb

In August, Japanese Emperor Hirohito made a speech to his people explaining his decision to accept the Potsdam Declaration. A video with the audio of the broadcast, along with a translation, can be viewed above.

According to NPR, Hiroshima was chosen because it was compact and the U.S. wanted to show that they could wipe a city off the map to push Japan into an unconditional surrender. It was also a manufacturing city of military important to Japan. Nagasaki was similarly chosen due to its military importance as a shipbuilding center.

Some soldiers in the Japanese Imperial Army did not take the surrender lightly. Some committed suicide, while others murdered Allied prisoners of war. Pockets of Japanese soldiers continued to fight on isolated Pacific islands until at least 1974.

4. Kisses Were a Common Way to Celebrate Japan’s Surrender

Kissing was one of the main ways people celebration Japan’s surrender. One of the most famous kisses ever photographed was captured in Times Square on August 14. The above iconic image was captured by Victor Jorgensen, a Navy photo journalist at the time. A similar image of the same couple was also captured by photojournal Alfred Eisenstaedt.

Alfred Eisenstaedt photo of US Navy veteran kissing a nurse taken on August 14, 1945 in Times Square at the the end of WWII. pic.twitter.com/n0sRJd4W3N

According to the New York Times, Gloria Bullard, a nurse during the war, claims to be the woman being kissed in the photo.

At one point, V-J Day was floated as being the date of World Peace Day. However, this date was ultimately chosen to be September 21, the day the United Nations begins its deliberations each year. 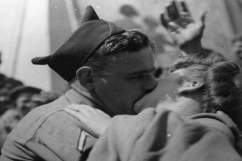 Loading more stories
wpDiscuz
1
0
Would love your thoughts, please comment.x
()
x
| Reply
Today is the Victory Over Japan Day, AKA V-J Day, Victory in the Pacific Day, or V-P Day. The date commemorates the Empire of Japan surrendering to the United States and its allies in World War II, which officially ended the war.