Matt Cardy/Getty Images The moon is seen behind trees as the early morning sunlight breaks through leaves that are beginning to change colour in Victoria Park on October 12, 2009 in Bath, England.

Today is the fall equinox, aka the autumnal equinox. It is the first official day of autumn where daytime and nighttime are approximately the same lengths. There are two equinoxes every year – in September and March – when the sun shines directly on the equator and the length of day and night is nearly the same. The one in March is known as the spring, or vernal, equinox, and marks the beginning of spring.

However, today is only the first day of the astronomical fall. The meteorological fall started on September 1. According to the Metro, meteorological seasons are based on the annual temperature cycle and are split into four seasons of three months. With the meteorological calendar, fall lasts until November 30, but the winter solstice isn’t until Thursday, December 21.

While the official first day of fall is related to when the equinox occurs, it might not feel like the light jacket weather we all crave right away—even for northern latitude countries like the U.S.A. and Canada. That’s because fall weather varies with climate. 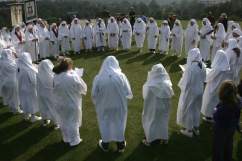 Read More
History
What time is the fall equinox today? Today marks the beginning of the autumn season when the day is equal to night, but what time does this actually occur?