NHC Hurricane Maria cone forecast for the evening of September 19.

The island of St. Thomas in the U.S. Virgin Islands is still reeling from Hurricane Irma. Now residents, stranded tourists and recovery workers are bracing for another powerful storm.

Hurricane Maria is a Category 5 hurricane packing maximum sustained winds of 175 miles per hour. The storm is currently located about 60 miles southeast of St. Croix, according to the latest advisory from the National Hurricane Center.

…POTENTIALLY CATASTROPHIC HURRICANE MARIA EXPECTED TO PASS NEAR THE U. S. VIRGIN ISLANDS TONIGHT AND OVER PUERTO RICO ON WEDNESDAY…

Hurricane Maria is a “potentially catastrophic” storm barreling down on the U.S. Virgin Islands, already devastated by Hurricane Irma which hit St. Thomas and St. John on September 6. Most of the buildings in St. Thomas were damaged in that storm, which had maximum sustained winds of 185 miles an hour. Much of the island is still without power and food and water is in short supply. 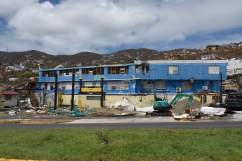 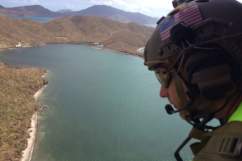 This time Hurricane Maria seems to have set her sights on St. Croix, an island in the U.S. Virgin Islands with about 50,000 residents. 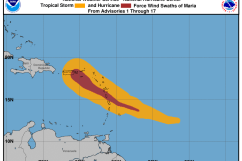 Hurricane Maria “is forecast to remain an extremely dangerous category 4 or 5 hurricane until it moves near or over the Virgin Islands and Puerto Rico,” the National Hurricane Center said.

National Hurricane CenterThe latest update for the path of Hurricane Maria as it makes its way toward Puerto Rico.

Critically ill patients in St. Thomas are being airlifted out of Hurricane Maria's path after Irma devastation. @DavidBegnaud reporting. pic.twitter.com/9ty3FD5aoV

Leaving St. Thomas for Puerto Rico; Many are staying. Again. Maria is coming. Some of the people who got out, on tonight's @CBSEveningNews pic.twitter.com/Y9dfbDgWkS

#WATCH: With the only hospital on #StThomas, U.S. #VirginIslands damaged by #Irma, the U.S. #Military builds a temporary one! #IrmaRecovery pic.twitter.com/7e76YdYKMs

Our officers and military forces have been ordered to enforce the curfew for the safety of the people.