Now that Hurricane Irma has been downgraded to a Tropical Storm and the worst of her wrath is over, people all over the country have turned their attention to Hurricane Jose. The storm became a hurricane as Irma was making her was through the Caribbean, making a beeline for the state of Florida.

Jose spent a few days minding his own business out in the Atlantic Ocean, but he has become a very powerful storm. According to USA Today, Jose is currently a Category 2 storm with sustained winds of 105 mph.

“Fortunately, over the weekend, Jose only brushed the islands of the Caribbean that had been slammed by Irma, such as Barbuda, Antigua and the Virgin Islands. As for its forecast, hurricanes in this part of the Atlantic often race out to sea and into oblivion, but that won’t be the case with Jose,” reported USA Today.

Over the past couple of days, models that previously showed that Jose would stay far away from the East Coast have changed. Both the GFS and the European models have taken Jose on a track that will lead him to the United States, a fairly popular hurricane hot spot this time of year.

The map below shows Jose’s projected path, which includes a big of a loop, which could cause him to gain some additional strength. After coming out of that loop, Jose’s path heads north east, aimed straight for Florida and Georgia’s coast.

“Lots of questions on Jose. heaven knows, my faith in the models are pretty low at this point, Still, I’ll get back on the horse. It looks like Jose stays East of Florida. It could, however, impact the Mid-Atlantic or the Northeast down the road. It will do a loop, then should kick,” Tampa-area meteorologist Denis Phillips said on Facebook.

It is still too early to determine Jose’s exact path — Irma’s path wasn’t completely known until she made landfall in Florida.

Below are graphics from today’s GFS models.

Way too early to tell, uncertainty so high over 5 days, but #GFS suggesting #HurricaneJose interactions with #IRMA could bring Jose to coast pic.twitter.com/toHHxEHbMd

I refuse to show GFS past day 5 but if I have to work again next weekend because of #Jose I'm going need a good shrink & divorce lawyer. pic.twitter.com/jKP2Pudzkl

The 12Z GFS has a new destination for Jose #NJwx pic.twitter.com/d67hPRRmp5

GFS ensembles show the operational GFS is an outlier but other members close to east coast with #Jose. Worth watching. #nbcct pic.twitter.com/CyEJKN353p

Below are graphics from recent European models.

Euro (ECMWF) ensemble output for Jose. Ensemble mean is well offshore, but early in the game. Could change. pic.twitter.com/Bkc6FvpauA 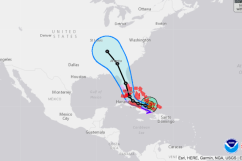