Mandatory evacuations were ordered for residents in Anaheim Hills, California on Monday as a fire spread to more than 4,000 acres.

Fire officials said that the massive blaze, dubbed “Canyon Fire 2,” has burned at least six homes so far, and extreme winds — with gusts in excess of 45 mph — have caused fires in front of the fire line. The wind has blown around hot embers, which have caused the fire to spread from home to home.

As of 4 p.m. local time, the fire was 0 percent contained, and the cause of the fire is currently unknown. One firefighter has been treated for “minor” injuries, but there haven’t yet been any other reports of injuries or fatalities as a result of the blaze.

Over 1,000 acres burned and 1,000 homes have been evacuated following a fast-growing fire in the Anaheim Hills area. https://t.co/RHeVjIGDYq pic.twitter.com/wnU9hUAc8m

More than 2,000 homes have been evacuated as the fire consumes brush and moves west, and multiple roads were closed. Officials have shut down the area as they tend to the blaze. For the latest information on the fire, call (714) 765-4333 or follow the fire department on Twitter here.

Here’s a look at those evacuations and where the fire is currently located.

A spokesman for the Anaheim Fire Department told The Los Angeles Times that “Canyon Fire No. 2” started around 9:20 a.m. local time Monday near 91 Freeway and Gypsum Canyon Road. Once it started, winds helped it spread across the area. More than 500 firefighters are working to contain the blaze and more are expected to assist in the effort Tuesday.

500 firefighters responding, expected to be up to 1,000 by tomorrow morning. #CanyonFire2

Watch a DC-10 jet drop Phos-Chek to control the spread of the Anaheim Hills #CanyonFire2: pic.twitter.com/zAXscuD9tb

An evacuating resident named Adam was seen by ABC 7 News using a hose to try and put out his neighbor’s house. He told the news outlet that he worked with others to get people out of the area as quickly as possible.

“We piled like 25 kids from Running Springs into our car, just got them away,” he said. “Their parents came and picked them up at our house.”

The fire comes just weeks after a brush fire burned over 2,500 acres at the Anaheim-Corona border, prompting dozens of evacuations. There were no reports of injuries in that fire, but six homes and a trailer of a semi-truck were damaged, according to ABC 7 News. Officials say the fire that started Monday is consuming the un-burnt brush left by the first wildfire. 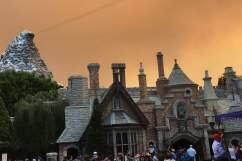 Read More
Breaking News
Follow Heavy ↓
wpDiscuz
0
0
Would love your thoughts, please comment.x
()
x
| Reply
Officials have ordered the evacuation of more than 1,000 homes after a fire in Anaheim Hills has engulfed much of the city. See the fire today and the map.