In the overnight hours of Sunday into Monday, several wildfires broke out in California, with the largest located in Napa, Sonoma, Mendocino, and Lake counties.

“A warning was issued today because dangerous fire conditions will exist until Tuesday in several areas of the San Francisco Bay Area, National Weather Service officials said. As of 11 a.m. a warning called a Red Flag Warning had been issued for the valleys and hills of the East Bay and North Bay and the Santa Cruz Mountains. Weather officials said the warning is in effect for those areas until 5 a.m. Tuesday,” SF Gate reports.

Below is a list of the current wildfires blazing in California, according to the Cal Fire website.

As of 6:14 p.m. on October 8, the Ridge Fire located in Lake County was affecting 87 acres and was 75 percent contained.

“Firefighters are currently working a wildland fire near the community of Clearlake. The terrain in the area is grassy oak woodland, steep terrains, and difficult access.”

As of 6:13 a.m. on October 9, the Cherokee Fire in Butte County had burned 1,000 acres and caused evacuations. The Cherokee Fire is located off Cherokee Road and Zonalea Lane. There are road closures on Highway 70 from Highway 191 to Table Mountain Road.

As of 5:57 a.m. on October 9, the Atlas Fire in Napa County was covering 5,000 acres. For evacuation information, click here.

For a full map of the areas where these wildfires are located, please click here. 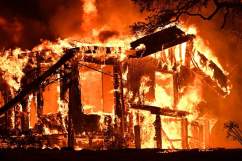 Read More
California, Fires
Follow Heavy ↓
wpDiscuz
0
0
Would love your thoughts, please comment.x
()
x
| Reply
California fires broke out in the overnight hours and have been blazing all morning. Thousands of acres in Napa and Santa Rosa are affected.