The grieving father of a 22-year-old soldier who died in an ambush attack in Afghanistan is speaking out against President Donald Trump and a false promise that was made to him weeks after his son’s death.

Chris Baldridge, of Zebulon, North Carolina, told The Washington Post that Trump called him a few weeks after his son, Army Cpl. Dillon Baldridge, was killed in action June 10. During the conversation, Trump promised the father that he would personally give him thousands of dollars in their time of grieving. However, that never came to fruition, Chris told The Post.

Dillon graduated from from Franklinton High School in Youngsville in 2012 and subsequently enlisted in the Army’s 25th Infantry Division. He was described as a top soldier in his class, and was sent to Hawaii for three years before going to Fort Campbell in Kentucky. His father told ABC 11 News after his death that his son turned down an offer to become a Ranger and instead wanted to go with his team on deployment to Afghanistan.

1. Dillon Was Gunned Down by an Afghan Officer in June

Dillon was one of three U.S. soldiers who were killed by an Afghan police officer who turned on them at the behest of the Taliban in what’s referred to as a “green-on-blue attack.” The terror organization claimed that one of their terrorists “infiltrated” the Afghan army to carry out an ambush attack on as many U.S. soldiers as possible.

“I feel betrayed,” Chris told ABC11 News. “(Dillon’s) over there training people to take care of themselves and then they turn on us.”

The attack occurred during a joint operation between the U.S. and Afghan forces in the Nangarhar province. The area is located in the Achin District, where offensive attacks had recently been carried out against an affiliate of ISIS.

Dillon was gunned down along with Sgt. Eric M. Houck, of Baltimore, Maryland and Sgt. William M. Bays, of Barstow, California.

To learn more about the three men, click below.

2. The Father Says Trump Promised to Establish an Online Fundraiser but Never Followed Through

Chris told The Post his conversation with Trump lasted around 15 minutes and it briefly touched on the way his son was killed while serving.

“I said, ‘Me and my wife would rather our son died in trench warfare,'” he told the newspaper. “I feel like he got murdered over there.”

The grieving father, who works in the construction industry, also expressed his frustration with the military survivor benefits program to the president. He said that because his ex-wife, Tracy Palmer, was listed as Dillon’s primary beneficiary, she was to be the recipient of the Pentagon’s $100,000 death gratuity.

“I can barely rub two nickels together,” he claims he said to Trump during the call.

In a surprise move, which “shocked” Chris, Trump offered him a sum of money from his “personal account.”

“(Trump) said, ‘I’m going to write you a check out of my personal account for $25,000,’ and I was just floored,” the father said. “I could not believe he was saying that, and I wish I had it recorded because the man did say this. He said, ‘No other president has ever done something like this,’ but he said, ‘I’m going to do it.'”

Chris said that in addition to the contribution, Trump said he would “direct his staff to establish an online fundraiser for the family.” That never happened, either, Chris said.

The White House didn’t comment on Chris’ account of the conversation with the president, but spokeswoman Lindsay Walters told The Post in a statement that “the check has been sent” as of October 18.

“It’s disgusting that the media is taking something that should be recognized as a generous and sincere gesture, made privately by the president, and using it to advance the media’s biased agenda,” she said.

3. Chris Said His Son Always Wanted to Be a Soldier

Chris Baldridge stands in front of a memorial for his son, Dillon.

When he died, Dillon left behind his mother and father, two stepparents and four siblings. Chris is re-married from Tina, and has at least two children with his current wife, Jessie Baldridge. That includes an infant sister that his son will never meet.

“I’m going to tell her that her brother was a hero who fought for our country so that other people can live free,” he told ABC 11 News during an emotional interview.

Posts to Chris’s Facebook page show that he frequently wears Dillon’s dog tag around his neck and has found ways to remember him and the life he lived.

Chris said that growing up, Dillon always wanted to be a soldier. When he finally became one, he got to live out his ultimate dream.

“It was one of those things you’d think, ‘Yeah, he’s going to be a soldier one day,'” Chris told the news outlet. “He’d be up at five in the morning watching the Military Channel on TV. What kind of kid does that?”

One relative remembered Dillon as being the “best of all of us,” adding that he was always passionate about helping people.

“Re-enlisted for another term. I love this job too much to walk away from it,” he wrote in 2016 on Facebook, along with this photo: 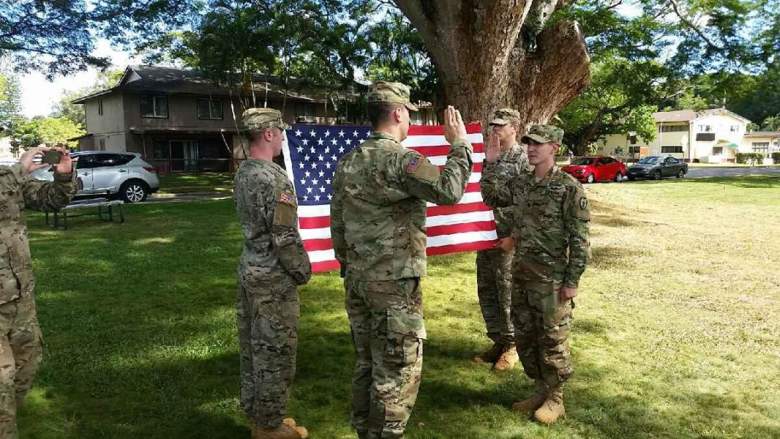 According to his Facebook page, Chris is a mechanic at RTT Machine Welding while also working for UK Unlimited, LLC. He wrote in a Facebook post shortly after Dillon’s death that he will “live the rest of my days honoring this young soldier.”

4. Chris Was Presented a Folded American Flag at a Memorial Service

Dillon’s body was returned home June 21, and he was posthumously promoted from corporal to sergeant. He was flown to Wilkes County Airport during the afternoon, and a procession led his casket to Ashe County as hundreds of people lined the roads to pay their respects to the fallen soldier.

A memorial service was held June 23, and it drew protests from members from the controversial Westboro Baptist Church, a statement on the organization’s website said.

Hundreds of people gathered to pay their respects and share emotional stories about Dillon at the service.

“I want to thank my brother for his sacrifice and thank you guys for being here,” his younger brother Zachary Palmer said.

Chris and Tina were presented a folded American flag at the conclusion of the service, which included a military graveside service with a 21-gun salute and the playing of “Taps.”

There was also a private, formal ceremony where Dillon’s parents were presented a gold star banner, which symbolizes the sacrifice he made.

5. A Gofundme Page Has Been Set up for the Family

A GoFundMe campaign had been started by a friend of Dillon’s mother, Tina. In four months, it’s raised over $5,000 toward its eventual $20,000 goal.

“More than anything, Baldridge loved his family,” the GoFundMe description says. “From the day he was born, he was adored by his parents, grandparents, aunts, and uncles, and memories from his childhood still bring a wide smile to their faces.”

The campaign is seeking donations for his family to recoup any funeral costs and help in their time of need. To contribute toward the cause, click here.

Another GoFundMe campaign was set up on behalf of Chris and Jessie. It’s raised over $1,000 in four months, and “all donations are collected by Dillon’s father,” the description said.

Read More
5 Fast Facts, Breaking News, Donald Trump
wpDiscuz
0
0
Would love your thoughts, please comment.x
()
x
| Reply
The father of Cpl. Dillon Baldridge says he was promised $25,000 by President Donald Trump but he never followed through with the vow.