The 73rd annual Columbus Day Parade may be met with some protests this year.

Columbus Day celebrates the anniversary of Christopher Columbus’s arrival in the US on October 12, 1492. The Columbus Day parade is an annual march down Fifth Avenue in Manhattan that celebrates the explorer and the contributions Italian-Americans have made to America.

Read on to learn more about the protests against Columbus Day, and those that have affected the Columbus Day parade.

1. Activists Plan to Interrupt the Parade with a Demonstration

A handful of activists have said they plan to protest the parade that honors Columbus, who many believe was a ruthless explorer responsible for wiping out populations of indigenous people with violence and slavery.

The annual Columbus Day parade is recognized as the largest celebration of Italian-American culture, and includes more than 100 groups, complete with bands and floats.

Live coverage of the parade can be seen here.

2. Statues of Columbus Have Been Vandalized In Recent Weeks

In recent weeks, protestors of Columbus Day have targeted statues of the Italian-born explorer.

Over the weekend, politicians defended a statue of Christopher Columbus at a parade in the Bronx. State Senator Jeff Klein said, “That statue has to remain in Columbus Circle,” according to NBC New York.

In late August, police arrested a 27-year-old man for beheading a Christopher Columbus statue in a park and splattering it with red paint and phrases that read, “Hate will not be tolerated”. Police say the man, Emmanuel Santiago Barista, smashed the statue with a baseball bat, according to NBC New York.

Resident Pat Gamberdella told News 4, “It’s very upsetting that American values have sunken to the level they are today… It’s unfortunate because I did go up there and I did see it all smashed.”

3. The Protests Are Part of a Movement to Abolish Columbus Day and Replace It with Indigenous Peoples’ Day

PROTEST TURNS VIOLENT: A truck charges at Native American protesters who were blocking traffic during a Columbus Day parade in Reno. pic.twitter.com/dwWauBCh83

Parade protests are all part of a larger movement to abolish Columbus Day and replace it with Indigenous Peoples Day.

Over the years, historians have uncovered extensive evidence suggesting Columbus treated indigenous populations ruthlessly. According to History.com, shortly after arriving in the New World, he “ordered six of the natives to be seized, writing in his journal that he believed they would be good servants.” The explorer also sent a number of natives to Spain to be sold, and many died en route. 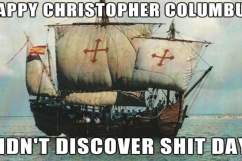 Indigenous People’s Day 2017: All the Memes You Need to See

4. A Man Dressed as a Ku Klux Klan Member Was Removed from the Parade on Sunday

On Sunday, three protestors were removed from the Columbus Day Parade.

According to ABC 7, two were dressed in fake chains. One wore a hooded white sheet.

The New York Post reports the men in chain as screaming, “We’ve got nothing to lose but our chains! Greed kills.” The outlet reports that one of the protests was given a summons for disorderly conduct, disrupting the ceremony and failing to comply with officers’ orders, according to police.

5. 35,000 People Are Expected to Participate in Monday’s Parade

Over 35,000 are expected to participate in the parade on Monday. The march will take place on 5th avenue, and span from 44th street to 72nd street. The parade began at 11am ET in midtown, and is expected to end at 3pm ET on the Upper East Side.

Leonardo Riggio, the chairman of Barnes & Noble, has been named the grand marshal of the event. As of 1pm on Monday, the parade was continuing despite the rain and controversy.

Loading more stories
wpDiscuz
0
0
Would love your thoughts, please comment.x
()
x
| Reply
Protestors have planned on speaking out at the Columbus Day Parade this year.