Weinstein has been accused of decades of sexual harassment, according to The New York Times.

Back in 2015, Chapman said she supported her husband when he was accused of groping an Italian model, according to the New York Post.

In a Forbes magazine interview in August, Chapman was asked what her personal motto is. She replied: “Never say never to anything. You just don’t know what’s around the corner. That’s the wonderful thing about life: Who knows what the future holds?”

On Tuesday, Chapman released a statement saying she is leaving Weinstein.

“My heart breaks for all the women who have suffered tremendous pain because of these unforgivable actions. I have chosen to leave my husband. Caring for my young children is my first priority and I ask the media for privacy at this time,” Chapman said in a statement to People magazine.

Harvey Weinstein's Wife Georgina Chapman Is Leaving Him: 'My Heart Breaks for All the Women Who Have Suffered' https://t.co/4XWZfG97Xr

A post shared by Georgina Chapman (@georginachapmanmarchesa) on Aug 18, 2017 at 3:15pm PDT

The couple got married in 2007 and have two children, a son Dashiell and a daughter India.

In August, Chapman spoke to Forbes magazine about how having children affected her career:

It’s daunting at first — you don’t know what to expect. But I quickly found that being pregnant with my daughter India brought out this new facet of my personality. I’m not an organized person by nature, but I became very, very focused. It changed the way I approach work. It freed me in many ways. Your whole value system changes once you have children. They become your priority.

In that same interview, she was asked what she couldn’t live without and she answered: “My mom, my girlfriends, my husband.”

I went to college to learn to be a designer. I didn’t go to college to learn to be a mother, and I feel like that’s the one you don’t want to get wrong! For me, it’s all about having the right people around. My husband is so supportive. My mother is so supportive. My brother is my CEO. My best friend is my business partner. I have a wonderful woman who helps me with the kids. I have the most incredible, loyal team. It just wouldn’t be possible without them.

2. Georgina Chapman Is Co-Founder of Marchesa

Georgina Chapman co-founded the fashion label with fellow former model Keren Craig in 2004. The brand is named after the socialite, Marchesa Luisa Casati.

Chapman told Forbes magazine earlier this year that their kids often play together when they visit them at work:

When India comes in, I honestly don’t see her! She’s very social. Delilah, Keren’s daughter, is just a year older, so they’re very close. Dashiell, my son, is the same age as Keren’s daughter Delphine, so they play. It’s a family business!

In 2006, Marchesa was named one of the CFDA/Vogue Fashion Fund’s top ten finalists, won the British fashion awards for Red Carpet Designer of the Year in 2007, and in 2008 won Britain’s Best Business Award.

3. Georgina Chapman Is a Judge on ‘Project Runway

We LOVE seeing @georginachapman back in the judge's chair! ❤️ pic.twitter.com/9WBck49BgL

Georgina Chapman has appeared many times as a judge on the reality show “Project Runway,” which is produced by Harvey Weinstein and hosted by Heidi Klum and Tim Gunn.

4. Georgina Chapman Was Born in London

A post shared by Georgina Chapman (@georginachapmanmarchesa) on Aug 7, 2017 at 5:29pm PDT

Georgina Chapman was born in London, England in 1976. Her mother is Caroline Wonfor, a journalist, and her father is Brian Chapman, a multi-millionaire businessman and owner of the organic coffee company Percol, according to Wikipedia.

Chapman grew up in Richmond in southwest London and attended Marlborough College in Wiltshire. In 2010, she was named to Tatler magazine’s best dressed list.

According to an official bio, Chapman attended the Chelsea College of Art and Design before attending the Wimbledon College of Art for Costume and Design. After graduating in 2001, worked as a costume designer.

Chapman also has a non-profit called Magic Bus that “lifts communities in India out of poverty by creating youth leaders while utilizing the power of play.”

Chapman told Forbes magazine that her grandmother is from India and the country has greatly influenced her life.

Growing up, I watched my father build his coffee company alongside his charity. He was one of the pioneers of fair-trade. It always made sense to me to give back to the people who’ve helped me realize my dreams. I wouldn’t be able to create the work I do without the incredible craftsmanship skills of the embroidery makers in India.

5. Georgina Chapman Is Worth About $20 Million

A post shared by Georgina Chapman (@georginachapmanmarchesa) on Sep 11, 2017 at 7:20pm PDT

According to The Richest, Georgina Chapman is reportedly worth $20 million.

This summer, Variety reported that the couple listed their home in the Hamptons for $12.4 million. The home is located in Amagansett, N.Y.

The Chapman-Weinsteins, who reportedly want to sell their Hamptons home because they don’t use it often, preside over a property portfolio that includes a five-floor townhouse on a tree-lined street in the heart of New York City’s West Village that was purchased in June 2006 for $14.95 million as well as a nearly 9,000-square-foot, turn of the 19th-century mansion on two sprawling waterfront parcels in Westport, CT, that together span nearly six acres and were purchased in two separate transactions, the first in 1994 the second in 2000, for a total of $8.24 million. Although it’s unclear if it was purchased for their own use, property records indicate the couple additionally owns a modest if not exactly inexpensive 1927 cottage in the Beverly Grove area of West Hollywood that was quietly acquired in late 2015 for $1.55 million. 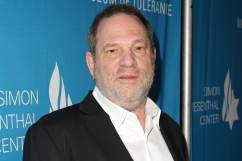 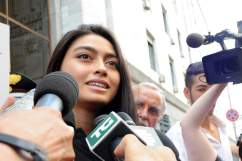