Getty Picture of the US embassy in Havana, taken on September 29 after the United States announced it is withdrawing more than half its personnel in response to mysterious health attacks targeting its diplomatic staff.

For nearly a year, officials have been investigating what’s led to a series of “deliberate attacks” on personnel working out of the United States Embassy in Havana, Cuba.

While they haven’t yet determined what’s caused at least 21 victims to be mysteriously injured, audio recordings obtained by The Associated Press on Thursday shed light into what they may have heard before suffering physical effects of the undisclosed attacks.

The recordings feature sounds similar to a group of crickets, but at a much higher pitch. They reportedly started some time after Donald Trump was elected president in November 2016, and have been sent to multiple U.S. agencies for analysis. But they haven’t given officials much to go on in their “ongoing” investigation.

Victims of the attacks describe hearing a noise inside and outside their homes in Cuba, and suffered debilitating effects a short while later. According to an AP story, some of those U.S. workers who have been described as spies suffered the most severe damage, including brain damage and hearing loss that hasn’t yet deteriorated.

“The recording gives us the first tangible sense of what it was like for these American government workers in Havana who were hearing these unexplained sounds in their residences and later developed physical symptoms,” the AP’s Josh Lederman said. “Americans who heard these sounds in Havana have described slightly different sounds. And even in some of the recordings that the AP has reviewed, there are slight variations. However, this high-pitched cricket sound seems to appear in all of them.”

George Washington University Professor Kausik Sarkar, who specializes in mechanical and aerospace engineering, listened to the recordings and told the AP it’s possible the piercing sounds could lead to physical damage.

“It’s like an acoustic hammer which is hitting you,” Sarkar said. “You’re just not able to hear it because its frequency is much higher. There were some concerns to it, and if it was really, really high, it could create some bioeffects.”

Listen to the high-pitch noises yourself in the video below:

Reports of the high-pitch noises and the subsequent ailments could point to some person or government agency targeting the United States’ intelligence network in Cuba.

On September 29, the U.S. Department of State announced it was withdrawing “all nonessential personnel” from the embassy in Havana. Secretary of State Rex Tillerson called the attacks “deliberately targeted,” but fell short of blaming Cuba in a statement issued following the withdrawal of U.S. personnel.

In conjunction with the ordered departure of our diplomatic personnel, the Department has issued a Travel Warning advising U.S. citizens to avoid travel to Cuba and informing them of our decision to draw down our diplomatic staff. We have no reports that private U.S. citizens have been affected, but the attacks are known to have occurred in U.S. diplomatic residences and hotels frequented by U.S. citizens. The Department does not have definitive answers on the cause or source of the attacks and is unable to recommend a means to mitigate exposure.

The decision to reduce our diplomatic presence in Havana was made to ensure the safety of our personnel. We maintain diplomatic relations with Cuba, and our work in Cuba continues to be guided by the national security and foreign policy interests of the United States. Cuba has told us it will continue to investigate these attacks and we will continue to cooperate with them in this effort.

The health, safety, and well-being of our Embassy community is our greatest concern. We will continue to aggressively investigate these attacks until the matter is resolved.

The Cuban government has vowed to cooperate in the investigation of the mysterious attacks, but were critical of the removal of the U.S. workers, saying it could lead to strained relations.

Those relations between the two countries have been well documented, dating back to the explosion of a U.S. battleship in Havana Harbor in 1898. In the decades that followed, there was the Bay of Pigs Invasion in 1961 and the Cuban Missile Crisis one year later. But in 2014, then-President Barack Obama reached an agreement with Cuban President Raul Castro to reopen embassies in the countries’ capitals and encourage tourism and business growth.

Since Trump’s taken office, though, he’s scaled back some of the policies that Obama initiated. He’s kept in place things like direct flights between the two countries and policies which make it easier for companies to do business. 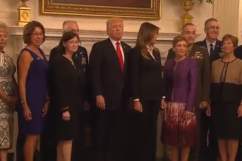