Apple iPhone 8 Plus units began shipping on September 22, but a few new owners have noticed a peculiar issue. The battery on some of these phones seem to swell and cause the case of the iPhone to break open and crack, exposing the inside of the phone.

Apple confirmed to techcrunch that they’re now looking into the issue, but the spokeswoman declined to comment further. So far, cnet has rounded up 6 reports of the issue.

The stories so far are based on social media posts.

The reports vary: some users say that their phone arrived cracked and some report that the phones swell once placed on a charger.

The phones crack open without any signs of scorching or explosion. Since the phones have only been on sale for a few weeks, it’s early in the life of the device. There’s a possibility that this issue will become more prominent over time.

These issues have shown up in phones in Taiwan, Hong Kong, China, Greece and Canada according to a roundup by The Guardian.

This problem is reminiscent of that of the Samsung Galaxy Note 7 issue where batteries caught fire and the phone was recalled.

Apple has yet to release figures for the first weekend sales of the new iPhones, so it’s unclear what percentage of users this is affecting at this time. It’s also still unclear whether this will cause a domino-effect where phones will have to be recalled or not. So far, there have been no injuries.

Some analysts have said that consumers may be holding off on the iPhone 8 and waiting for the iPhone X instead, which will be available for pre-order on October 27. Some sources say those phones may not ship on time due to a lack of production materials, so consumers may not be able to pick up their iPhone X until early 2018. 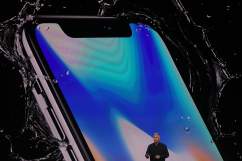