Jackson’s Honest entered the Shark Tank with their corn and tortilla chips cooked in organic coconut oil that are rich in nutrients and gluten-free.

We interviewed Megan and Scott Reamer who started the company after their son Jackson with diagnosed with a rare illness and they realized the benefits of healthy fats. They decided to fry their own potato chips in coconut oil and when they served these at dinner parties, their friends and family told them they needed to put them on the market.

Now the healthy snacks can be found in 5,000 spots nationwide including Whole Foods, Fairway and Publix. As for their bestsellers, they noted Sweet Potato chips as number one, followed closely by their Purple Heirloom and Sea Salt varieties. The sales of their flavored tortilla chips, especially the Organic Lime & Sea Salt and the Organic Salsa Fresca, are not far behind.

Sadly, in August, Jackson passed away, but his legacy lives on through his family and their company. They started Jackson’s Honest Charitable Foundation for children with orphan diseases in his honor.

Here’s what else they told us about…
Interested in Jackson’s Honest? Buy them here.

Through years of intense trial and error, we were able to reverse engineer a diet rich in ancestral saturated fats like coconut oil that helped alleviate some of the more profound and debilitating symptoms of our son Jackson’s extremely rare, one of seven known cases, autoimmune disease. As these fats became a critical part of his diet and ours, we started making everything we could with them at home, including potato and tortilla chips cooked in organic coconut oil. What was a treat for friends and family soon became a business as their encouragement grew that we should try to sell these chips to other folks looking for a choice in the snack foods that they ate.

Nutritional Benefits of Their Chips

Fully saturated fats like coconut oil, which are 93 percent saturated, are great for cooking because they are so stable. In fact, it’s their saturation that makes them so stable, able to withstand the heats necessary to fry potatoes and corn masa into chips without breaking down into denatured free fatty acids like polyunsaturated and monounsaturated industrially-processed vegetable oils can. We also concentrate on using the best possible sources of heirloom, non-GMO potatoes and corn: purple and red potatoes; orange and purple sweet potatoes; red, yellow, and blue corn for example. In this way we are maximizing the nutrient density of every potato and tortilla chip we make.

Pros & Cons to Working With Your Spouse

The pro and the con are actually the same! There is never a day off – the workday is never over – when you work with your spouse because your home life is your work life. We wouldn’t have it any other way either because Jackson’s Honest has become a mission for our entire family – each of our three kids as well as ourselves. While it has taken a Herculean effort to maintain the pace we have kept since we started this business, we are all better off for it because of the invaluable lessons the experience has taught us as well as how close the effort has made us as a family with such an important mission.

It's almost time! This Sunday, October 1st, catch Jackson's Honest on the season premiere of Shark Tank on ABC at 8/7c. *check local listings* Grab some friends, grab some chips and watch with us as we celebrate Jackson's legacy.

We were incredibly nervous right up to the point when we started walking down the hallway to enter the tank. Once those doors opened, a tremendous peace came over us because we knew we had prepared so well for the opportunity and that no matter what the outcome was, we and our business would be better off for having gone through the experience.

Plans for the Future & New Product

Stocking up for the week… you know, just the essentials. PS- our 5oz bags of potato chips are on sale at @wholefoodsco 2 for $6 through the end of the month!

Our plans are to partner with as many other retailers across the nation where our products are not yet sold as we can so that we can serve our mission to bring these ancestral fats back to the food chain. We have many more products that we have already developed that will shortly be hitting shelves including a first-of-its-kind Jackson’s Honest Puffed snack. We have been so humbled by the Shark Tank experience and are so optimistic about all of the opportunities that are in front of us. 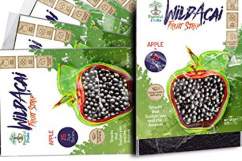 Peaceful Fruits on ‘Shark Tank’: A Look Inside the Company