On October 18, the same day the Los Angeles Times noted that the death count from the wildfire raging through northern California had reached 42, with 23 of those fatalities in Sonoma County, Thomas D. Homan, Acting Director of Immigration and Customs Enforcement (ICE) released a statement suggesting the deadly, destructive fire had been set by a “dangerous criminal alien” named Jesus Gonzalez. In response, Sonoma County sheriff Robert Giordano issued a statement correcting what he called ICE’s “misinformation about a suspected arsonist,” saying ICE’s press release was “inaccurate, inflammatory, and damages the relationship we have with our community.” Here’s five things you need to know:

1. The Cause of the Fires Remains Unknown

The cause of the deadly fires is still officially under investigation. At least one couple in northern California believe their electric company is to blame; on Tuesday, October 17, the Santa Rosa Press Democrat noted that couple who lost their home to the fires filed a lawsuit against utility company PG&E, claiming that the company’s high-voltage power lines started the fires after coming in contact with dry vegetation.

Also on October 17, the Sonoma County Sheriff’s Office held a press conference (which Fox station KTVU-2 put on Facebook) to rebut rumors by right-wing media outlets blaming an undocumented immigrant for the fires.

At that Tuesday press conference, Robert Giordano said Jesus Fabian Gonzalez, a homeless man, had been arrested in Maxwell Farms Regional Park on Sunday afternoon after starting a small fire “to warm himself.” Gonzalez had a fire extinguisher and a small lighter when he was arrested. Since then, Gonzalez has been in Sonoma County Jail under $200,000 bail: $100,000 each on charges of felony arson and a misdemeanor drug warrant from another county.

However, Giordano said there is “no evidence” linking Gonzalez’ small fire in Maxwell Park to the deadly fires burning through Sonoma and other northern California counties. (Gonzales was arrested for a fire he’d set on fire in Maxwell Park on Sunday, Oct. 15, whereas the wildfires in Napa and Sonoma counties have been burning since Oct. 8.)

2. Gonzalez was not the First Target Blamed by Far-Right Conspiracy Theorists

GotNews.comBefore Gonzalez’ arrest, far-right websites found other scapegoats to blame for the wildfires (Screenshot from GotNews.com)

Before Gonzalez’ otherwise-routine arrest on Sunday, far-right websites blamed other scapegoats for the fires. Charles C. “Chuck” Johnson, the “far right mega-troll” (as the Washington Post described him) who was permanently banned from Twitter in 2015 after asking for money to “take out” a prominent Black Lives Matter activist, owns GotNews.com, which posted an Oct. 14 article claiming that unnamed people in “Law enforcement” and the “legal marijuana industry” believed the wildfires had been set by “Mexican drug cartels” though as the SFist pointed out, these stories cited no actual evidence at all.

Gonzalez set his fire and was arrested the day after GotNews published its unsubstantiated claims. The Santa Rosa Press Democrat reported on Gonzalez’ arrest, and then Breitbart picked up the story of Gonzalez’ arrest and added claims that his arrest was in conjunction with the wildfires.

Robert Giordano and the Sonoma Sheriff’s Office called their press conference in part to debunk such false claims.

3. The Day After the Sonoma Sheriff’s Press Conference, ICE Released a Contradictory Statement

ICE statement strongly implying (though not outright saying) that a “dangerous criminal alien” released by the Sonoma County sheriff was responsible for recent wildfires (Screenshot from ICE.gov)

“Once again, a non-cooperative jurisdiction has left their community vulnerable to dangerous individuals and preventable crimes. ICE lodged a detainer against Jesus Gonzalez with Sonoma County jail officials on October 16, following his arrest on felony charges for maliciously setting fire to a property. This is especially troubling in light of the massive wildfires already devastating the region. Over the past year, ICE has lodged detainers against Mr. Gonzalez after four separate arrests by Sonoma County on various felony and misdemeanor charges. ICE was never notified of Mr. Gonzalez’ various releases. Additionally, Mr. Gonzales has been returned to his home country of Mexico on two separate occasions. The residents of Sonoma County, and the state of California, deserve better than policies that expose them to avoidable dangers. Non-cooperation policies – now enshrined in California state law – ensure only one thing: criminals who would otherwise be deported will be released and left free to reoffend as they please.”

The current ICE Acting Director is Thomas Homan, who has previously criticized “sanctuary cities” such as New York, Chicago and San Francisco are “un-American.”

Homan first joined ICE in 2003, and in 2015, then-President Obama gave Homan the Presidential Rank Award as a Distinguished Executive, while Homan was working as ICE’s Executive Associate Director.

The next day, the Sonoma Sheriff’s office posted a statement on its Facebook page, calling it a “message from Sheriff Rob Giordano in response to misinformation about a suspected arsonist.”

After summarizing the facts of Gonzalez’ arrest on Oct. 15, Giordano described Gonzalez as “a Sonoma Valley resident who was recognized by deputies and has been seen sleeping in the same park where he started the fire. Gonzalez told the deputies he lit the fire to warm himself up.”

But Gonzalez’ fire was not the wildfires, the cause of which is still being investigated by Cal Fire. Giordano further offered this as a possible motivation for ICE’s recent focus on Gonzalez and Sonoma County’s sheriff:

ICE sent a detainer requesting the Sheriff’s Office hold Gonzalez for 48 hours past his scheduled release time. However, this detainer is not signed by a judge so the Sheriff’s Office cannot legally honor it. Multiple Federal court cases have determined these administrative detainers are unconstitutional. Notably, the Miranda-Olivares v. Clackamas County case found administrative detainers are an unreasonable seizure and, therefore, are a violation of the Fourth Amendment. ICE has the ability to obtain a warrant for anyone they are interested in like we do every day in this county. If ICE obtains a warrant I can legally hold the person and would be happy to do so.

On Oct. 20, the Santa Rosa Press Democrat (whose original report of Gonzalez’ arson arrest was quoted out of context in the initial stories blaming him for the wildfires) ran an editorial decrying how “Fake fire news fans flames of discord and ignorance.”

On Oct. 12, the County of Sonoma’s official Twitter feed announced that “Immigration status will not be asked at our shelters. Keep your families safe. Our shelters have room for you.”

This tweet came the after after Sonoma Sheriff Giordano held another press conference hoping to dispe harmful rumors about the fires. The San Francisco Gate reported Giordano as saying “There’s a rumor out there that people are checking immigration status in shelters and that is not true.” That rumor was actually a distortion of more-accurate reports saying that shelters were asking evacuees for their names, so they’d know who was in the shelter.

Alegría De La Cruz, chief deputy county counselor for Sonoma, told Democracy Now’s Amy Goodman that up to 20,000 undocumented immigrants in the area have lacked any sanctuary from the flames, sleeping on beaches rather than visit shelters for fear of seeing federal agents there. The fears of anti-immigrant actions and sentiments only grew worse after ICE’s statement connecting the wildfires with an illegal immigrant. 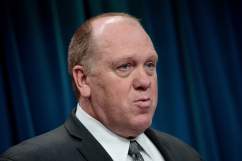