In the wake of the tragic mass shooting in Las Vegas on Sunday night, names of victims are beginning to emerge.

Jordan McIldoon, from Maple Ridge, British Columbia was among the 58 people killed near the Mandalay Bay Resort and Casino during the Route 91 Harvest country music festival.

McIldoon Was Attending the Concert With His Girlfriend

Jordan McIldoon’s parents, Al and Angela McIldoon, were left in shock when notified of their son’s death. Jordan was their only child.

They confirmed his death to Canadian outlet, CBC News.

They wrote that their son grew up on the family acreage in Maple Ridge, and was a “self-described cowboy boot, tattoo-covered redneck who loved the outdoors.”

McIldoon’s parents also confirmed their son was attending the Route 91 Harvest country music festival over the weekend with his girlfriend. They were scheduled to return Monday night.

McIldoon’s girlfriend survived the shooting, and has been in contact with the McIldoons via phone, according to Elite Daily.

McIldoon Was a Mechanic Apprentice

McIldoon was one of two Canadians who died in Sunday night’s mass shooting.

Jessica Klymchuk, a single mother of four from Edmonton, Canada, was also killed in the attack while visiting Las Vegas with her fiancé, according to multiple media outlets.

McIldon Would Have Turned 24 on Friday

According to Huffington Post, McIldon would have celebrated his 24th birthday on Friday, October 6.

The 23-year-old British Columbia native was confirmed dead, and a fellow concertgoer named Heather Gooze posted on Facebook that he died in her arms.

The Las Vegas Shooting Is the Deadliest U.S. Shooting

In the deadliest mass shooting in recent American history, more than 58 people, including an off-duty Las Vegas police officer were killed in Las Vegas on Sunday.

The Associated Press reports that about 22,000 country music fans were in the crowd when the shooting began.

Headliner Jason Aldean was on the stage when shots rang out. A video posted on social media captured the harrowing moment the gunshots began, forcing Aldean to stop mid-song and leave the stage.

Witnesses reported that a gunman opened fire from the 32nd floor of the Mandalay Bay Casino. Police later found the shooter, 64-year-old Stephen Paddock, dead in a Mandalay Bay hotel room where he had at least 10 rifles and hundreds of rounds of ammunition.

McIldon Is 1 of 58 Victims Who Lost Their Lives

McIldon is one of several victims who have recently been identified. Another named victim is Sonny Melton, who was attending the country concert with his wife, Heather Gulish Melton. She sent a statement to Fox 17, in which she credited Melton with saving her life.

“At this point, I’m in complete disbelief and despair. I don’t know what to say. Sonny was the most kind-hearted, loving man I have ever met. He saved my life and lost his,” Heather said.

Melton, who was a nurse, used his body to cover his wife from gunfire, according to Newsweek.

The shooting claimed 58 lives so far and over 500 have been injured.

If you would like to donate blood to help victims injured by the shooting, visit the Labor Health & Welfare Clinic, 7135 W. Sahara, in Las Vegas, Nevada. 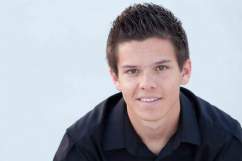 Quinton Robbins: A Tribute to the Las Vegas Shooting Victim